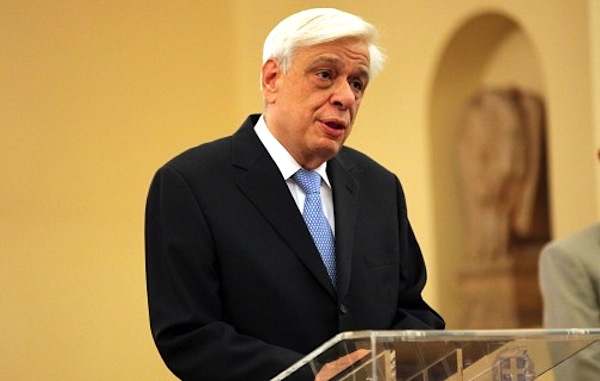 In a message marking the 41st anniversary since the fall of the 1967-1974 military junta and the restoration of democracy in Greece, President of the Hellenic Republic Prokopis Pavlopoulos urged Greeks on Thursday to reaffirm their commitment to Europe and stressed that they must not allow either the causes or the consequences of this seven-year dictatorship to be forgotten.
Especially, he said, “when this criminal deviation came at the cost of deep – and as the tragedy of Cyprus shows, still unhealed – injuries to our nation’s core.”
“Our concomitant debt, especially at this crucial time for our future and the country, is to also defend the rights acquired from the restoration of democracy and from our later alignment, one fully compatible with our democratic and cultural roots, with the other democratic European peoples in the framework of the European Union, even more so in the framework of its inner core, the Eurozone,” Pavlopoulos said.
Since the founding of Greece’s new Constitution under Constantine Karamanlis in 1975, the Greek President said, all governments had worked to make Greece a part of the “great European family,” leading to economic and social prosperity but also to security from external threats.
“Today, in the vortex of an unprecedented social and economic crisis, and with our gaze fixed on the valuable lessons of the foremost historic anniversary of July 24, 1974, we are once again called to fight united to the greatest possible degree. To fight with all our strength for Greece to remain in the EU and the Eurozone, to continue the natural and self-evident national course,” he said.
Any other course would be contrary to the recent popular mandates but also clearly disastrous on a social, economic and national level, he pointed out, warning that there must be no illusions on this matter.
“To all of our fellow citizens that are genuinely troubled about the future and essence of European unification, this must be pointed out: it is infinitely better, while remaining steadfastly and determinedly in the inner core of Europe, to contend with its peoples so [Europe] can correct its mistakes and rediscover its fundamental values and principles…In any case, it is inconceivable to choose the lonely and clearly dead-end path of social and economic impoverishment, and an extremely corrosive, even fatal, national adventure,” he said.
Greeks owe this to their history, to the victims of dictatorship and those that struggled against it, as well as to themselves as modern Greeks and Europeans, but chiefly to the coming generations, Pavlopoulos said.
“Our mistakes, especially the mistakes caused by our failure to resist as we should to the sirens of populism, should under no circumstance be allowed to mortgage our future and prospects,” he stressed.
Presidency to host luncheon for 41st anniversary since restoring democracy
Pavlopoulos will host a luncheon for political party leaders at 2:00 pm on Friday at the Presidential Mansion to mark the 41st anniversary since the fall of the 1967-1974 military junta and the restoration of democracy in Greece.
The luncheon will be attended by Prime Minister Alexis Tsipras, main opposition New Democracy interim leader Evangelos Meimarakis, “To Potami” leader Stavros Theodorakis, Greek Communist Party (KKE) Central Committee member Athanasios Pafilis (in the absence of KKE General Secretary Dimitris Koutsoumbas), Independent Greeks (ANEL) leader Panos Kammenos and PASOK leader Fofi Gennimata.
(source: ana-mpa)