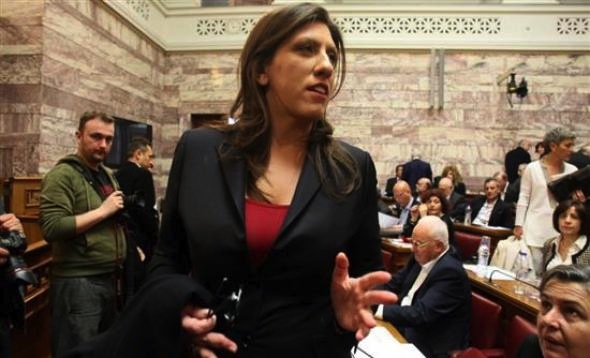 Greek Parliament President Zoe Konstantopoulou spoke out against the changes in the Code of Civil Procedure that the Greek Parliament will vote on later in the evening.
“The vote is a [parliamentary] diversion because it is introduced as an intervention by the institutions under the threat of bankruptcy and is set as a prior action. Basic citizen rights for standing a fair trial are being violated,” she said during a speech in the Greek Parliament on Wednesday.
Konstantopoulou confirmed that she cannot vote for these prior actions in parliament. She voted against the first set of prior actions last week as well.
The Greek Parliament President also highlighted the opposition of the Justice Minister and other government MPs to the legislation.
Aside from her parliament speech, Konstantopoulou also penned a letter addressed to the President of the Hellenic Republic, Prokopis Pavlopoulos, and Greek Prime Minister Alexis Tsipras, asking them to inform their European counterparts of her letter.
Following her letter, it has been reported that Tsipras has agreed to meet with Konstantopoulou on Thursday to discuss its content.
In the letter, Konstantopoulou argued that the fact that the legislation was demanded by the institutions as a prior action to initiate bailout negotiations is a clear sign of disregard toward parliamentary procedures, popular rule and democracy in Greece.
She also noted that these changes were suggested to the previous Greek administration and in a nationwide lawyers’ vote, 93% of Greek lawyers had voted against adopting them.
“This violent attack against democracy cannot happen in the context of the European Union. And it definitely cannot happen silently,” the letter concluded.