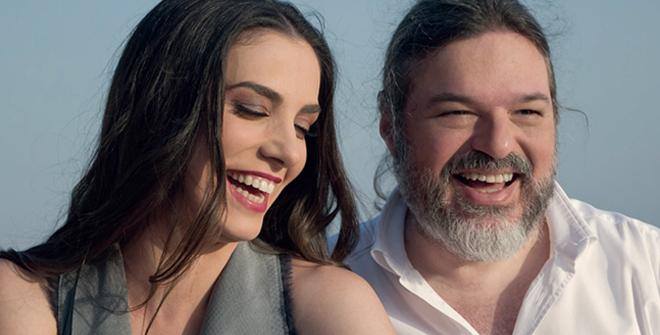 When the sun sets on Saturday, August 1, something magical will happen. A Full Moon Concert will begin at 9:00 pm on the largest archaeological site in Europe – the Greek island of Delos. Singer Fotini Darra will perform with composer Dimitris Papadimitriou, transporting the audience on a mythical musical journey created particularly for this unique night.
Papadimitriou has prepared two songs dedicated to Apollo, the ancient Greek god of light, as well as a repertoire of Greek music, featuring the clear voice of Darra as it resonates off the Aegean sea, ancient temples, archaic monuments and a mountain of myth.
In a joint statement, Papadimitriou and Darra said: “On the sacred island of Apollo, in the ancient cathedral of music, we hope to fill the deserted temple with music once again. With our souls set high in the sphere of Apollo, we will sing songs with our audience, using notes and lyrics that will please Phoebus.”
The extraordinary summer music event is a collaboration of the Municipality of Mykonos, Cine Manto Mykonos and Delos Tours. Ticket price is 25 euros and includes the performance as well as the boat transfer to and from the island. Boat departure for this unique event is at 7:30 pm.
According to Papadimitriou, apart from the finest songs of modern Greek poetry, the program will include the performance of songs with lyrics from ancient lyrical poetry, the Palatine Anthology, tragedies and comedies. The new composition of hymns dedicated to Apollo, Homer and Callimachus will be prominently featured. “The program will be brought to life with a small orchestra and consist of our favorite songs,” noted Papadimitriou.
Darra, born in Zakynthos, is both singer and actress. She released her first solo album in 2004, titled “Wind Report,” including songs by Papadimitriou, which were based on poems written by Greek and foreign poets and lyrists.
Papadimitriou has a long repertoire of music composition dating back to the early 80s, including soundtracks for film and television. He was born in Alexandria, Egypt, and studied at the Greek National Odeon focusing on guitar, piano and violin. As a professional musician, his early classical compositions were for the piano and violin.