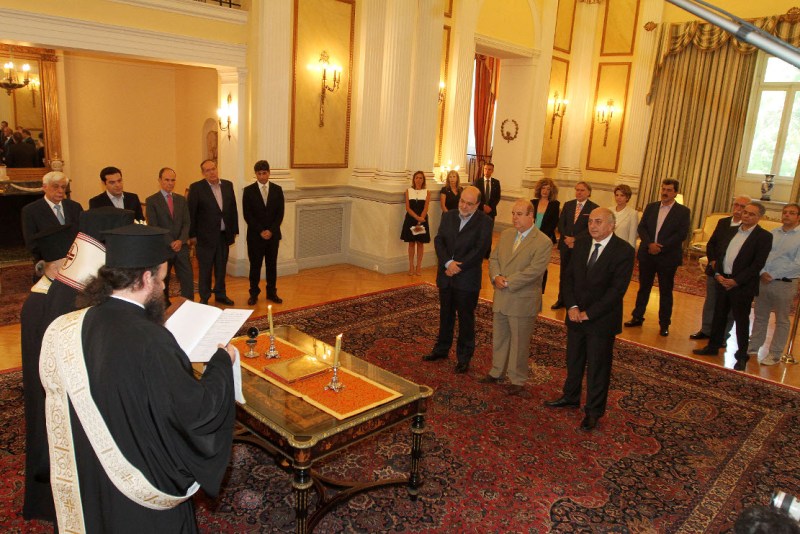 The new Greek cabinet was inaugurated on Saturday morning in a ceremony that was followed by a Ministerial meeting.
The new Ministers officially accepted their new posts under the supervision of the President of the Hellenic Republic, Prokopis Pavlopoulos. The usual live broadcast of the event was conspicuously absent.
Deputy Finance Minister Trifon Alexiadis, Deputy Foreign Minister Giannis Amanatidis and Deputy Labor Minister Pavlos Haikalis took a religious oath, while the rest of the new Ministers took a political one.
Following the inauguration, Greek Prime Minister Alexis Tsipras held a Ministerial meeting where he informed the new Ministers of the next steps the government has to take.
New government spokesperson Olga Gerovasili said that this is a crucial moment for Greece, requiring more action than talk.
“I think it is time to reverse the way people feel. To make people feel safe and secure under the SYRIZA government,” she said.
New Deputy Defense Minister Dimitris Vitsas was optimistic about the new administration’s capabilities.
“I believe the new administration will continue the previous one’s efforts, perhaps under better conditions, which we will have to create,” he said.

The American Author Who Fell in Love With the Greek Language

The Life of Philip Ludwell, America’s First Convert to Orthodoxy