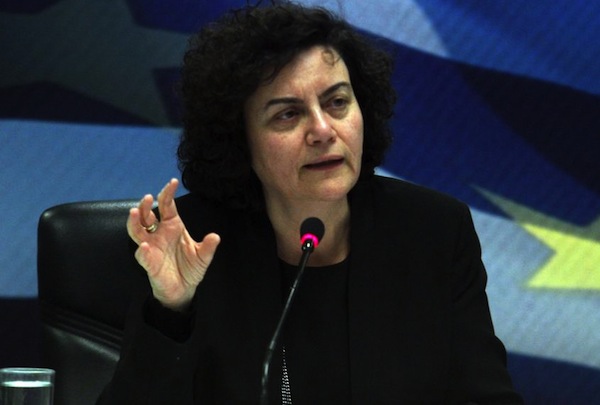 Greek Alternate Finance Minister Nadia Valavani informed Prime Minister Alexis Tsipras that she resigns from her post in a letter sent on Monday, July 13 to the Maximos Mansion.
The Finance Ministry in an announcement on Wednesday released the full text of Valavani’s letter. Valavani among other things said that she supported the negotiation group on Friday because she was certain that there will not be an agreement.
“I still believe that there will not be an agreement. Τhe tactic of the sovereign circles in Germany is the total humiliation of the government and the country” said Valavani and thanked the prime minister for giving her the opportunity to serve their “liberation effort.” “I want to believe that the fight continues,” she concluded.
Valavani’s resignation came amid allegations on Tuesday that she withdrew 200,000 euros from her banking acount one day before capital controls were imposed. The withdrawal was made by an acount in a bank in Heraklion, Crete.
The former deputy denied the allegations that were brought up by a New Democracy MP. She insisted that her resignation is based on her political decision to remove herself from a government that would sign an austerity agreement. She also said that the false accusations were a political plot from the opposition to undermine her and SYRIZA ahead of the parliament vote on Greece’s third bailout. She also said that she doesn’t have an acount at the bank she allegedly withdrew money from.
According to a protothema.gr report, the withdrawal was made by her mother who has an acount at the particular bank.

What Americans and Greeks Searched on Google in 2021