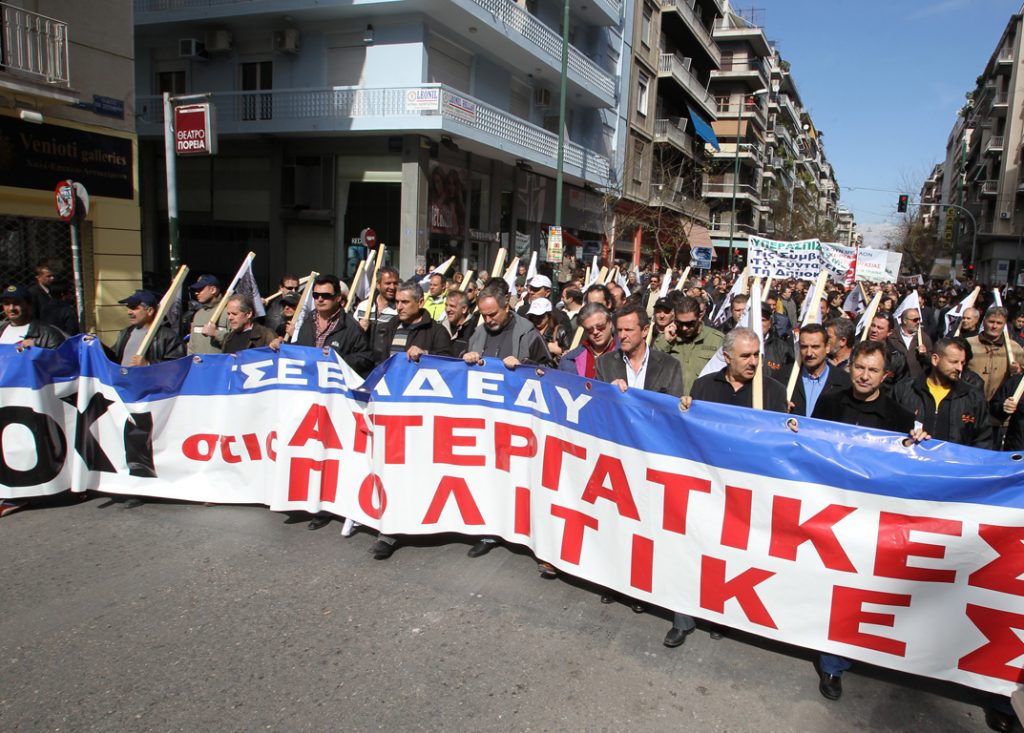 It is really sad to see the people of a country that was on the brink of bankruptcy three days ago to go on strike and take it to the streets to demonstrate against the deal that saved them from bankruptcy. It is as if this is a strike in favor of bankruptcy.
The new bailout agreement Prime Minister Alexis Tsipras has managed to secure after 17 hours of hard negotiations that verged on humiliation is not a bed of roses for Greece. It’s more of a bed of nails. The proposed deal contains some harsh austerity measures and reforms that would make even diehard capitalists cringe. Yet, austerity reforms might be the shock therapy the Greek economy and Greek society need.
A society that has learned to survive on tax evasion, lawlessness and corrupt practices, from the Prime Minister to the last newspaper kiosk owner, and from the hospital manager to the small tavern owner. A society with 35-year-old pensioners, blind taxi drivers, paid sinecures in the public sector, people who receive pensions 10 years after they died, doctors who declare 10,000 euros yearly income and countless other categories of happy Greeks who live splendidly while destroying the economy.
Now all these people, and they are not just a few, see the new reforms as a danger to their well-being. They see the “greedy” Europeans as the ones who want to impose evil things such as tax audits, public employee evaluations, debt repayments and retirement after 60. In other words, they hate to see practices and rules that apply to normal countries apply to Greece because… “we are unique, special people.”
So on Wednesday, public sector employees, municipal workers, pharmacists and doctors will go on strike to protest against the harsh reforms the Greek government is about to bring in order for the country to stay afloat and (hopefully) get on the path of economic recovery.
It is natural, though. Public employees don’t want to be evaluated because many of them do very little actual work. The same applies to municipal employees. Pharmacists want to be the only ones selling vitamins and other parapharmaceuticals and the new bailout deal says that these products can be sold in super markets as well. Public doctors are a different story: They have every right to strike because their salaries have dwindled to humiliating levels. And there’s very few of them left in Greece. The strike is also for unionists and their friends who want to protect their sinecures.
So, in essence, it is special interest groups that don’t want the changes the required reforms will bring. And they go on strike. The right to strike is undeniably an essential right in a democracy. However, in Greece, it is so abused that not only it has lost its sheen, it has also lost its meaning. During the economic crisis there has been a major strike almost every two weeks. Going through the motions, people rally and shout slogans that have lost their meaning. Strikes and demonstrations have become part of the Greek lifestyle. This must be the only country that has a website that tells you what strikes are on each day.
And all strikes and demonstrations are essentially for the same demand: Don’t change anything, we are fine in our corrupt, clientelist, statist existence; we want to keep living on loans we refuse to pay back; we want all the privileges of a European Union membership and none of the obligations; the world owes us because we are the cradle of western civilization; we want free money because we voted so.
Wednesday’s strike, which is the same repeated strike that goes on for five years now, is supposedly against austerity. But if strikers are honest with themselves, they will admit it is a strike against change. Against the changes needed so that Greece will not have to rely on borrowed money and handouts forever.