Euro Summit on Greece: Behind the Scenes 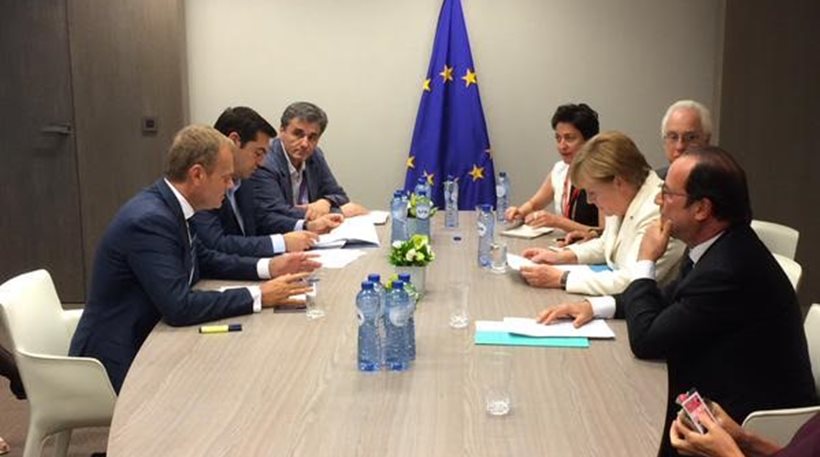 A lot has happened during 17 hours of talks on the Eurozone’s future.
Before Greece and its creditors agreed on a new 86-billion European Stability Mechanism (ESM) program, there were multiple interruptions and as the night went on, reports of impasses and confrontations surfaced.
The Financial Times reported that at approximately 6:00 am Brussels Time, so around the 14th hour of the Euro Summit, Greek Prime Minister Alexis Tsipras and German Chancellor Angela Merkel had all but given up on reaching an agreement.
The two colliding leaders were prevented from abandoning the negotiating table by European Council President Donald Tusk.
“Sorry, but there is no way you are leaving this room,” he was quoted as saying.
Tusk was not the only mediator. French President Francois Hollande, who had argued that there can be no such thing as a temporary Grexit, pushed for an agreement.
Hollande noted that France’s stable relationship with Germany is an important factor in order to reach a deal. However, he was opposed to Germany’s insistence that 50 billion euros of Greek public assets be transferred to an external fund and be privatized over time.
“Nothing would have been worse than humiliating Greece. Greece did not seek charity but solidarity from the Eurozone,” he said and called it an issue of “sovereignty.”
Eventually, it was agreed that the fund will be established in Greece. Out of the 50 billion euros it will generate, 25 billion will finance the recapitalization of Geek banks, 12.5 billion will be used to repay debts and the other 12.5 billion will be invested by the Greek government.
Hollande, Merkel, Tsipras and Tusk broke from the other Eurozone leaders and held four-way meetings multiple times throughout the night.
Aside from these four, Italian Prime Minister Matteo Renzi, who has been pushing for a deal, was also involved during a tense moment. Renzi fended off pressure on the Greek government with Dutch media reports claiming that he had a confrontation with Dutch Prime Minister Mark Rutte who was skeptical about supporting a deal.
Finally, reports surfaced that German Finance Minister Wolfgang Schaeuble became irritated with European Central Bank (ECB) President Mario Draghi and warned him to not think of him as “stupid.”