TechNews
GreekReporter.com Greece This Is the Document on Greece the Eurogroup Presented to EU Summit 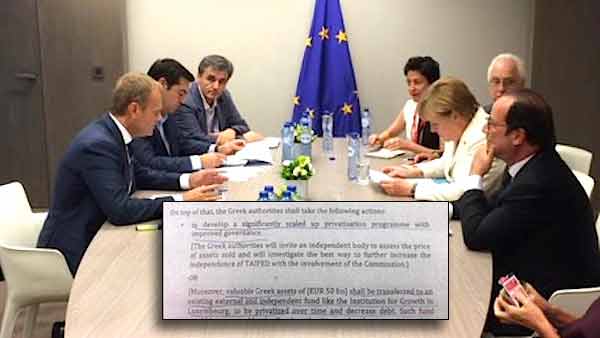 A list of reforms some of which must be legislated by Wednesday in the Greek Parliament was submitted to the European Union by Eurogroup President Jeroen Dijsselbloem.
The Greek side has called the text a “monster” as it contains some harsh austerity measures and reforms that need to be implemented immediately as a condition for Greece receiving a third bailout package estimated at 74 to 90 million euros.
Twelve of the reforms must be legislated by Wednesday in order for European partners to sit down on the negotiating table again.
The Greek side is asking the European Central Bank to restart emergency liquidity assistance (ELA) to Greek banks on Monday so they open again.
The 12 reforms to be legislated by July 15 (Wednesday) are the following:
Streamlining of the VAT system and the broadening of the tax base to increase revenue;
Upfront measures to improve long-term sustainability of the pension system as part of a comprehensive pension reform programme;
The adoption of the Code of Civil Procedure, which is a major overhaul of procedures and arrangements for the civil justice system and can significantly accelerate the judicial process and reduce costs;
The safeguarding of the full legal independence of ELSTAT;
Full implementation of the relevant provisions of the Treaty on Stability, Coordination and Governance in the Economic and Monetary Union, in particular by making the Fiscal Council operational before finalizing the MoU and introducing quasi-automatic spending cuts in case of deviations from ambitious primary surplus targets after seeking advice from the Fiscal Council and subject to prior approval of the institutions;
The transposition of the BRRD at the latest within a week with support from the European Commission.
Carry out ambitious pension reforms and specify policies to fully compensate for the fiscal impact of the Constitutional Court ruling on the 2012 pension reform and to implement the zero deficit clause or mutually agreeable alternative measures by October 2015;
Adopt more ambitious product market reforms with a clear timetable for implementation of all OECD toolkit I recommendations, including Sunday trade, sales periods, pharmacy ownership, milk, bakeries, [over-the-counter pharmaceutical products in a next step], as well as for the opening of macro-critical closed professions (e.g. ferry transportation). On the follow-up of the OECD toolkit-II, manufacturing needs to be included in the prior action;
On energy markets, proceed with the privatization of the electricity transmission network operator (ADMIE)[, unless replacement measures can be found that have equivalent effect on competition, as agreed by the institutions];
On labor markets, undertake rigorous reviews of collective bargaining, industrial action and collective dismissals in line with the timetable and the approach agreed with the institutions. [In addition, the Greek authorities shall modernize the legislative framework for collective dismissals, in line with best practice]. On the basis of these reviews, labor market policies should be aligned with international and European best practices, and should not involve a return to past policy settings which are not compatible with the goals of promoting sustainable and inclusive growth;
Adopt the necessary steps to strengthen the financial sector, including decisive action on non-performing loans and measures to strengthen governance of the HFSF and the banks, in particular by eliminating any possibility for political interference especially in appointment processes;
Representatives of the lending institutions will be in Athens to monitor the progress of the reforms.
See the full text here.