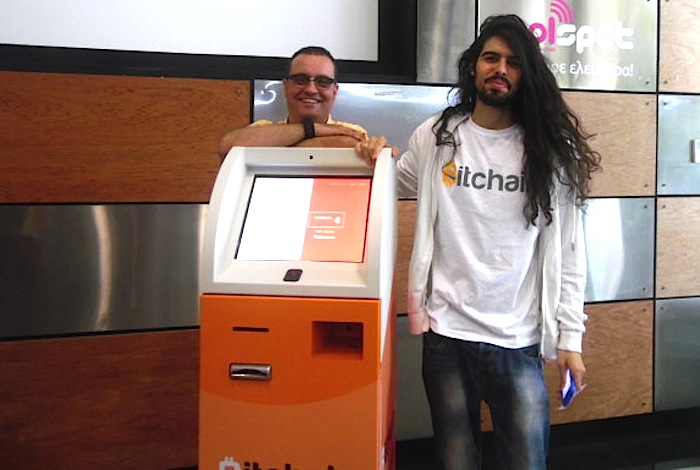 The first 2-way bitcoin ATM was inaugurated in downtown Athens on Saturday at The Cube, a coworking space that houses several innovative startups. And many find that through this very ATM they can overcome Greece’s capital controls.
The 2-way (bitcoin to euro and vice versa) ATM machine was installed by Spanish startup company Bitchain. Joaquin Fenoy, the company’s 36-year-old chief technology officer (CTO), believes that installing the machine might help Greeks during the crisis.  After the implementation of capital controls, Greek citizens are able to withdraw only 60 euros per banking account. But this doesn’t apply to bitcoin.
“It is a system that cannot be controlled,” noted Bitchain CTO Joaquin Fenoy at the inauguration event.
“People are not limited, here” he added. In fact, as he was speaking, a young man was able to withdraw 120 euros from his bitcoin wallet, which is double the amount Greeks are allowed to withdraw from banks on a daily basis.
The crypto currency might be helpful especially to the young entrepreneurs who cannot fulfill payments abroad because of the recent limitations. 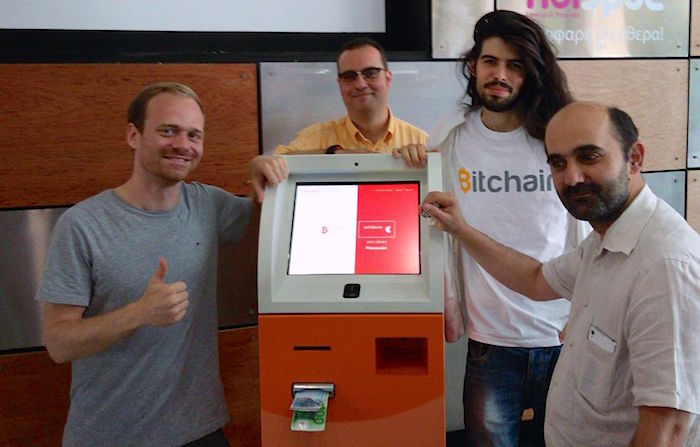 The bitcoin is a completely digital currency. It is not available in any physical form of coins or banknotes. It is not produced by any particular country and not controlled by any particular bank. Production, storage, handling and all transactions with bitcoin are exclusively in electronic form. In more technical terms, the bitcoin is a peer-to-peer payment system and a digital open source exchange, invented by Satoshi Nakamoto in 2008.
According to Adrian Verde, who also works with Bitchain, the ATM allows people to store their own money with 0% commission fees. “The banks are withholding the people’s own money and a bitcoin ATM machine could help in such a situation,” he said. 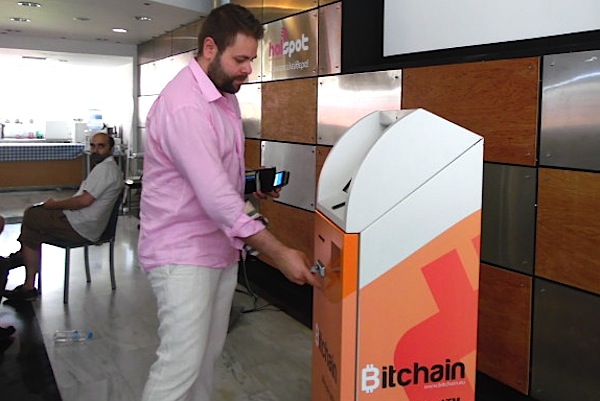 The event was attended by several curious Greeks who wanted to know more about the bitcoin and be one of the first people to use the machine. Two university students, Dimitris and Aris, were excited by the prospect.  However DImitris noted that such technology may need more time to grow in Greece, since people are more used to “real money” and they are often suspicious of online transactions.
But for Petros, the bitcoin has created an online community without limits and borders. “Bitcoin ATMs are an easy way to send money abroad and make transactions online, two things that are currently not allowed in Greece due to the capital controls,” he said. He also noted that the transactions are safe and transparent since the system allows users to see any transaction that has been completed since the bitcoin first made an appearance in 2008.
Petros also noted that the bitcoin, via the newly installed ATM in Greece, can be used in many ways to help the country during the crisis. The digital currency could be used by international corporations that wish to send money to their Greek offices for actions in Greece, or businessmen from other countries can invest in Greek startups or other companies.
“It is a peer-to-peer system with no delays that is based on trust,” Petros said. “I believe that Greeks will be able to learn to use and trust bitcoin.”
“They learnt to use Google, why not this?” he concluded.