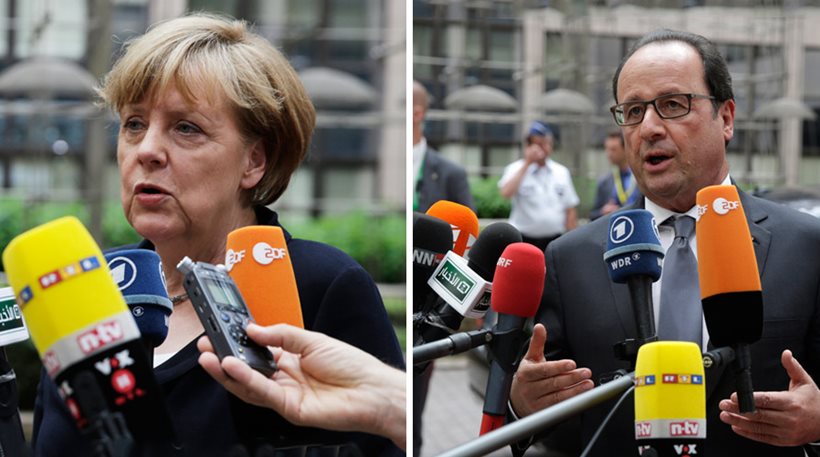 European leaders entered the crucial summit that will decide the future of Greece in Europe with mixed expectations, while Greek Prime Minister Alexis Tsipras asked for an “honest compromise.”
German Chancellor Angela Merkel said she is not surprised that another Eurogroup meeting on Greece ended without a single document to be discussed.
“I’m not surprised, the situations is very difficult. Greece has lost something more important than a currency, it has lost trust,” the German chancellor said, adding that negotiations will be very difficult.
French President Francois Hollande was more optimistic pointing out that France will do everything possible for Greece not to leave the Eurozone.
“We need to signify the meaning of our Europe and what interests we have in common,” he said, while at the same time clarified that “there is no temporary Grexit, there is Grexit or no Grexit.”
“We will either talk about Greece in the Eurozone or out of the Eurozone. But we do not want that. We need common sense and understanding,”he  said and called on Greece to make efforts and to demonstrate its ability to implement reforms, and the EU to help Greece.
European Commission President Jean-Claude Juncker, stated on his arrival to the summit: “I will fight until the last second to reach an agreement,” he said and added: “There is willingness to work together and I believe the agreement will come up.”
European Parliament President Martin Schulz stated characteristically: “Today we decide on the future of Europe.”
“This is not just an agreement, but it is an agreement there will be the United Europe that we know,” Schulz said, adding that this is the responsibility of the Greeks and the heads of member states… Today we decide on the future of Europe… It is required by everyone to reach a constructive solution today.”
On his part, Alexis Tsipras declared that an honest compromise is needed, if all parties involved want that. “We owe it to all peoples of Europe who want to see a united Europe and not a divided Europe,” the Greek prime minister said.