GRNews
GreekReporter.comGreeceVaroufakis: 'I Prefer to Be an MP and Be Known as Yanis'

Varoufakis: 'I Prefer to Be an MP and Be Known as Yanis' 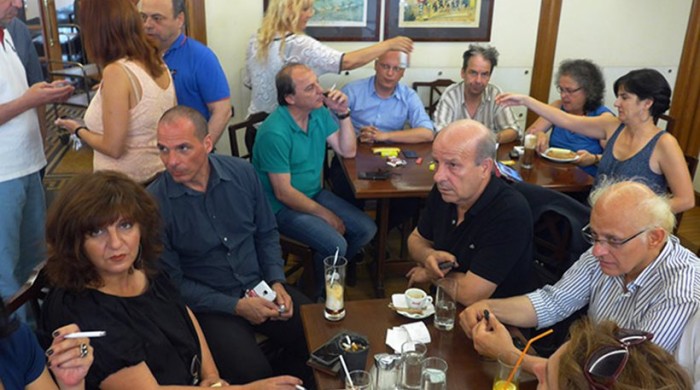 Former Greek Finance Minister Yanis Varoufakis admitted that Germany appears to have a plan to force Greece outside the Eurozone, even though while he was in office he insisted that Grexit scenarios were a bluff to push the Greek government to accept harsh austerity measures.
Talking with reporters at the Greek Parliament café, Varoufakis noted that Wolfgang Schaeuble is the only Eurozone Minister with a specific plan. He also said that the German Finance Minister completely controls the majority of the Eurogroup except for French Finance Minister Michel Sapin. “Schaeuble has a plan for Greece’s exit from the Eurozone,” and added, “this is his best chance to succeed.”
When asked if he believes the Germans are taking into account the estimated cost of a Grexit, Varoufakis argued that Schaeuble believes losses can be controlled.
Furthermore, the former Greek Finance Minister stated that it is possible that his exit from the Greek government was due to Schaeuble’s pressure.
As for whether he believes that a deal will be achieved in the next 24 hours, he initially said “no comment” but later added: “I would like an agreement to be reached but only if it is also a solution. At the moment, we cannot judge the outcome.”
People at the café called him “Minister” but he always answered: “I’m not a Minister. I’m a member of Parliament.”
“Once a Minister, always a Minister,” he said, adding that he prefers to be an MP and be called Yanis.
Asked to comment on the recent referendum results, he stated that the outcome was epic and grandiose, although he avoided to answer the question about whether the citizens voted “No” but the government is following the “Yes” direction.