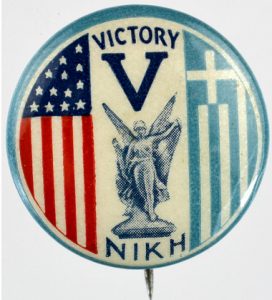 This year’s 4th of July  holiday coincided with Greece’s referendum.  As an American by birth and Greek by blood, I honor America’s victory over taxation without representation and Greece’s OXI victory – the first decisive challenge to neoliberal economics since European integration.
The United States shares a unique history and special debt to Europe.  The imperial powers of the 18th century took clear sides in the American Revolution. The Anglo-Franco rivalry dating back to the Roman Empire was intensified by the humiliating French defeat in the Seven Years War (1756-1763). France’s colonial interests in Louisiana and the Caribbean cemented its role as the first foreign power to support the fledging American nation. Without the French navy, General Lord Cornwallis would not have surrendered at Yorktown, thus ending the war of independence. Spain fought for the colonialists for much the same reasons. While Germany did not become a united nation until 1871, German Hessians, known for their commanding military skill, fought on the side of the British as hired mercenaries. The revolutionary war would not have been won without European assistance.
It is time for the United States to once again return the favor.
The International Monetary Fund is a tool of U.S. global financial power.  Shortly after meetings with President Obama and Treasury Secretary Jack Lew in Washington last Thursday,  the IMF announced that it knew Greek debt was unsustainable.  The well-calculated, well-funded, and well-developed message machine that has allowed neoliberalism to flourish while eviscerating the Greek economy and people has exposed the fault lines of European coexistence and hopes of maintaining a united Europe of equals.
After Greece’s anguished referendum vote, the Troika now faces an existential choice:  further punish Greece for a financial debt burden BOTH sides risked or come to the table with new FinMin Tsakalotos and rebuild the trust needed for a tangible solution.
Varoufakis resignation on Monday confounds the notion rising like a storm that Greek Prime Minister Tsipras is some self-styled, left-wing dilettante determined to create a Che Guevara-esque revolution. He may have endangered Greece through inexperience and a narcissistic FinMin but this enduring notion that Greece has been the only profligate party and therefore holds the entire burden for the default is losing sway. The New York Times reports that the tense final hours of negotiations in Brussels before Alexis Tsipras flew back to Athens and called the referendum confirm the Troika privately refused to discuss debt reduction while publically chastising Greece for not bringing responsible reforms to the table.
The mistakes Greece and Europe have made are abundant. Real lives hang in the balance as bankers and politicians try to score advantage and explain why good money should not be spent after bad. European technocrats have conveniently forgotten that successive Greek governments before Syriza took on massive public debt from Troika creditors and both anticipated those loans would deliver future gain. They didn’t. Move on. And share responsibility for failed austerity conservative and progressive economists alike have warned against.
Now is the time for new solutions not schadenfreude.
The intolerable recycling of 90% of all bailout money to pay banks has only served to increase Greece’s debt burden by 50% since the crisis began. As real jobs, real GDP, and real lives are shattered. This epic stalemate is best expressed by American politician Daniel Moynihan who said, “The central conservative truth is that it is culture, not politics, that determines the success of a society. The central liberal truth is that politics can change a culture and save it from itself.”
In our world of globalized ‘flash boys’ finance, all governments must borrow money to invest in their economies. The fatal mistake in this tragedy is how Goldman Sachs and other private investment bank debt were transferred to EU institutions and the IMF under Christine Lagarde. Now comes a group of U.S. members of Congress warning that the IMF could – perhaps for the first time in decades – be held accountable for the economic destruction that it helped implement. The letter objects to the IMF “taking a hard-line with respect to demands that Greece implement further reforms.”
The U.S. has been using quiet diplomacy to convince EU creditors to partially write off some of Greece’s debt.  As Edward Luce wrote in the Financial Review, “The U.S. has been neither strong nor wrong but weak and right” when it comes to the Greek crisis. Time for the U.S. to be right and strong and work with the IMF.  If normalizing economic interests isn’t enough incentive for Jack Lew,  the geopolitical consequences of a Grexit certainly concern Defense Secretary Ashton Carter. Known by some, worth remembering by all is the founding purpose of NATO, essentially designed to “keep the Russians out, the Americans in, and Germany down.” All three now seem at risk. All because some bankers got caught with their hands in the cookie jar.
The United States entered Europe’s great wars only after vital national interests were threatened. This is just such a moment in American-European relations. Time to send Christine Lagarde to the kids table and bring in the cavalry.

The Greek War of Independence had many heroes. The first names that come to mind are: Kolokotronis, Karaiskakis, Papaflessas, Bouboulina, Diakos, Kanaris
Ancient Greece