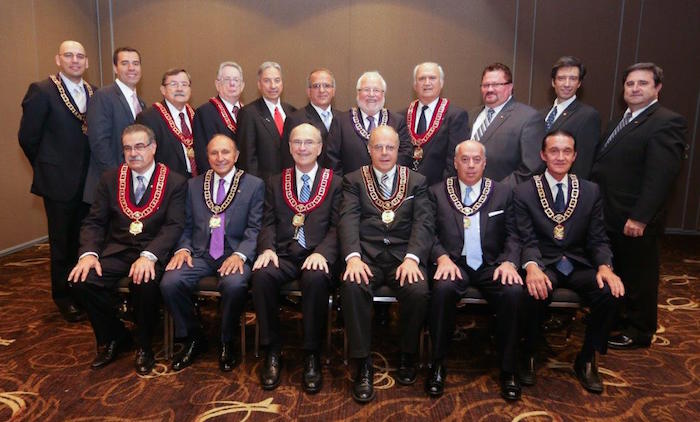 “It is an honor and privilege to be elected AHEPA supreme president,” Supreme President Galanis said. “My sincere appreciation is given to the convention delegates who placed their support and trust in me to lead this vibrant, venerable, and unique organization in the coming year. I am excited to work with our seasoned Supreme Lodge and our membership to keep AHEPA on the steady path set forth by my predecessors in a spirit true to our mission.”

He added, “My parents were Greek immigrants, and I’m proud of my heritage and that is why I’m a member of AHEPA.”

At the installation ceremony, the supreme president also discussed his goals and challenges.

“Obviously, our immediate thoughts and concerns are with the people of Greece during this most difficult and challenge time in Greece’s history,” he said. “Also, we aim to complete our capital fundraising campaign to help rebuild Saint Nicholas and focus our internal efforts on membership growth and retention. In addition, the community continues to face a multitude of challenges that are important to address as the need for community service is never ending, both in the United States and abroad, and the promotion of Hellenic ideals will always be a priority for AHEPA.”

Galanis is a 47-member of Chapter 43, Milwaukee, Wisc. He has served AHEPA in numerous leadership positions including most recently supreme vice president and on the Board of Trustees. As supreme president, Galanis’ responsibilities include being the chief executive officer and principal spokesperson of the entire AHEPA domain, which includes the United States, Canada, and chapters in Europe.

The supreme president is a founding partner of Galanis, Pollack, Jacobs & Johnson, S.C., a Milwaukee-based law firm. He is a graduate of the University of Michigan Law School and received his undergraduate degree from the University of Wisconsin at Madison. He also attended the London School of Economics. Galanis has served as president of several community and charitable organizations, including the Boys & Girls Club of Milwaukee and the Greater Milwaukee Foundation.

The AHEPA Supreme Lodge is the international governing body of the organization.

Elected to positions on the Board of Trustees were: Nick Aroutzidis, London, Ontario; and Lee Millas, Trenton, N.J. Michael Papaphotes, Brooklyn, N.Y., was elected to the Board of Auditors.