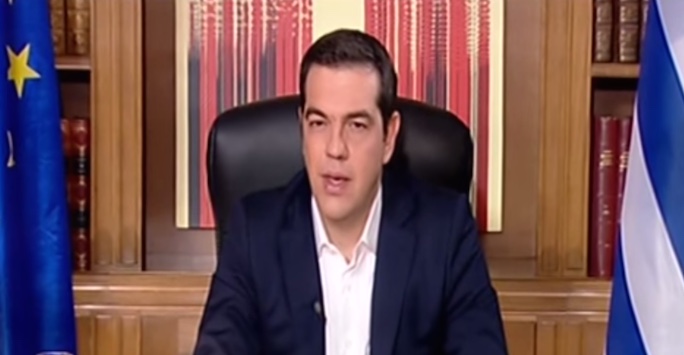 Greek Prime Minsiter Alexis Tsipras said that Greek banks will reopen when Greece and its creditors leave from the negotiations table with an agreement in hand.
After the Greek government decided to hold a referendum asking its citizens to vote YES/NO on the bailout deal offered to debt-ridden Greece by its creditors, the Governing Council of the European Central Bank made a decision Sunday to freeze the level of emergency liquidity assistance to Greek banks resulting in the implementation of capital controls and a bank holiday in Greece, initially announced until July 6.
Currently Greek citizens are allowed to withdraw €60 per day maximum from each of their accounts only via ATMs. Visitors and other holders of cards issued abroad are exempt from the restrictions.
Talking to Antenna TV, Tsipras urged again Greeks to vote NO on the referendum, a result that he said will be “an answer to Europe’s bad practices and the financial elite that governs the union today.”
The Greek PM skirted a question whether he would call elections if the “yes” side prevails, saying that he would remain “the institutional guardian of the constitution” and set in motion “the necessary procedures.
If the referendum result is a “no” to the bailout agreement by the creditors, Tsipras said that in that case he will have a better ability to renegotiate and bring back an improved agreement within two days.