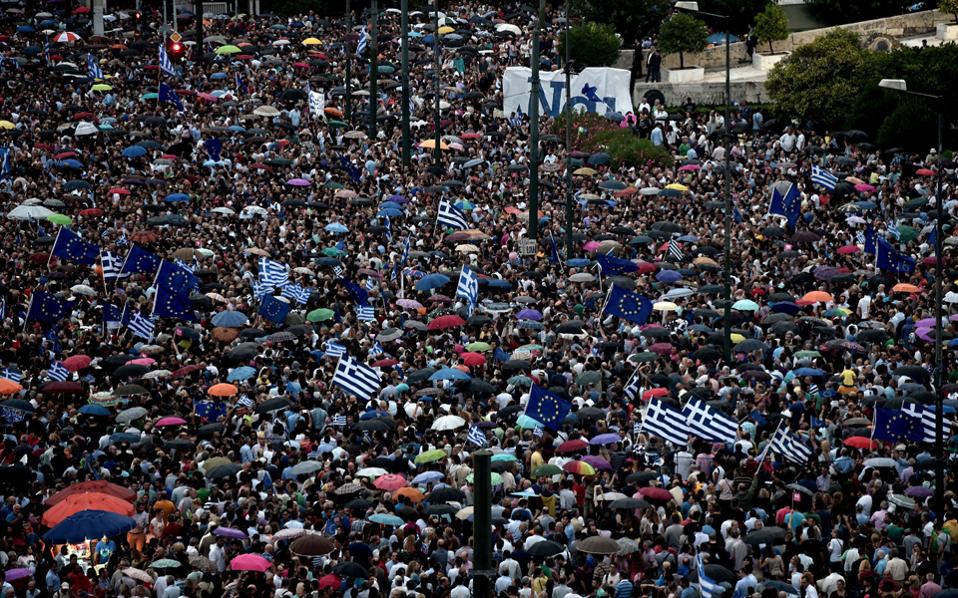 Thousands of Greeks protested in front of the Greek Parliament asking to stay in the European Union and the euro. The mayors of Athens and Thessaloniki delivered speeches and demonstrated for Europe.
Despite the early drizzle that developed to a hard rain, thousands of pro-Europe demonstrators rallied at Syntagma Square in downtown Athens under the banner “We Stay in Europe,” asking Greece’s government to sign a deal and keep the country in the Eurozone.
Athens Mayor Giorgos Kaminis, Thessaloniki Mayor Yiannis Boutaris, the President of Mayors of Greece and other luminaries spoke and protested against the government’s decision to leave the negotiating table and call for a referendum.
Kaminis spoke of “tragic moments” for Greece nad called on the government to return to the negotiating table, saying that the referendum is a “shame” because it is not clear what the question is.
Boutaris said that the referendum divides Greeks, and Greeks should not be divided. He called the referendum “misleading” arguing that a “No” to the agreement will have catastrophic consequences.
Constitution attorney and law professor Nikos Alivizatos spoke about the unholy alliance between SYRIZA and Golden Dawn who want Greece out of Europe and back to the drachma, urging citizens to vote “No” on Sunday’s referendum.
Some of the slogans were “Tsipras, Kammenos and the Nazis are traitors who want us back to the drachma” and “Resign!”