GRNews
GreekReporter.comGreek NewsEconomyTsipras: Either They Do Not Want an Agreement or They Serve Special...

Tsipras: Either They Do Not Want an Agreement or They Serve Special Interests in Greece – Full List of Counterproposals 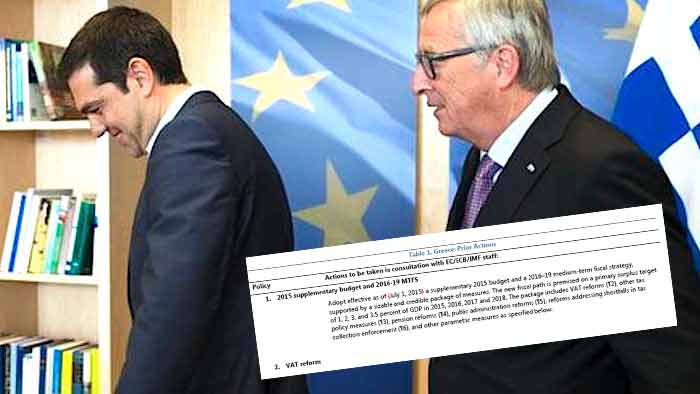 “Either they do not want an agreement or they serve special interests in Greece,” Prime Minister Alexis Tsipras said to his colleagues, shortly before departing for Brussels.
The Greek prime minister was referring to the insistence of the International Monetary Fund to not accept equivalent measures to the ones they proposed. The IMF says that the Greek proposal is too heavy on taxes and asks for revenues from spending cuts.
“The non-acceptance of equivalent measures is unprecedented. Neither in Ireland nor in Portugal were they rejected. Nowhere! This strange stance may be due to two reasons. Either they do not want an agreement or they serve specific interests in Greece,” Tsipras said, according to a government source.
What do lenders propose
Meanwhile, the Greek government rejected the lenders’ counterproposals on the grounds of being recessionary.
According to Greek media, the IMF put forward plans for deeper pension cuts, double the cuts to defence spending, and less hikes in corporate tax rates.
Regarding pensions, Greece proposed an insurance fund revenue increase from a raise in employer contributions and by limiting early retirements.
Lenders, on the other hand, insist on savings of 1 percent of GDP in 2016 and elimination of the supplementary allowance for low pensions (EKAS) by th end of 2017.
Moreover, institutions still insist in raising additional tax revenues of 1 percent of GDP from VAT instead of 0.74 percent proposed by Greece.
Regarding corporate taxes, Athens had proposed to increase rates from 26 percent to 29 percent while creditors propose to be no more than 28 percent.
The List of Counterproposals    (Full List in pdf)

Fiscal
Increasing revenues from VAT by 1 pct of GDP and raising VAT on catering services to 23 pct.
100 pct tax advance from legal entities
Abolition of tax exemption for fuel used in farming
Reduction of defence spending by 400 million euros (instead of 200 mln proposed by Greece)
Smaller hikes in the taxation of legal entities (to 28 pct instead of 29 pct proposed by Greece)
No tax relief for island residents (to offset an increase in VAT for islands)
The institutions also refused to accept taxation revenue proposed by Greece from:
e-gaming-VLT gaming machines (electronic gambling)
Revenue from 4G and 5G licences
Pensions
The creditors insist on full implementation of law 3863/10 that deals with the way pensions are calculated, raising the lower pensions and increasing the higher pensions.
They insist on equivalent measures to offset suspension of the zero deficit clause
They demand cuts of 0.25-0.5 pct of GDP in 2015 and 1 pct of GDP in 2016
Complete abolition of early retirement until 2022 (to 67 years independent of years of work and 62 years with 40 years full employment).
Abolition/replacement of the EKAS low-pension benefit until December 2017
Increase in pensioners’ health contributions from 4 pct to 6 pct
Gradual abolition of exemptions financed by the state budget and harmonization of social insurance contributions with the structure of IKA from July 1, 2015.
Abolition of all levies for third parties (such as the advertizing stamp duty) by October 31, 2015.
Finding equivalent measures that will cover the cost of a Council of State ruling reversing past pension cuts.
Tsipras, Juncker, Lagarde, Draghi to have talks before Eurogroup
The Greek prime minister will have a meeting with the heads of Greece’s troika of lenders prior to the crucial Eurogroup meeting on Wednesday evening. European Commission President Jean-Claude Juncker, European Central Bank President Mario Draghi and International Monetary Fund Managing Director Christine Lagarde will discuss differences on proposals with Tsipras.
“Of course we want changes and they don’t, and this is part of the bargaining process, albeit less effective when done publicly,” a senior official of one of the creditors said.
Why Greece cannot make further defence cuts
The Greek proposal included 200 million euros in defence cuts in next year’s budget. Creditors want double that amount. However, Greece’s defence spending was reduced by 40 percent in the last four years.
The consensus in Greece is that the country is under constant threat by Turkey.
“With no new procurement initiative on the horizon, future defence budgets will consist largely of the cost of earlier arms purchases, military pay and pensions and the armed forces’ operating expenses. Only the last can be reduced,” says a Guardian report.
There is also strong evidence to indicate that some of the contracts under which the arms were supplied were obtained by bribery, a practice for which Greece has been widely criticized in creditor nations.