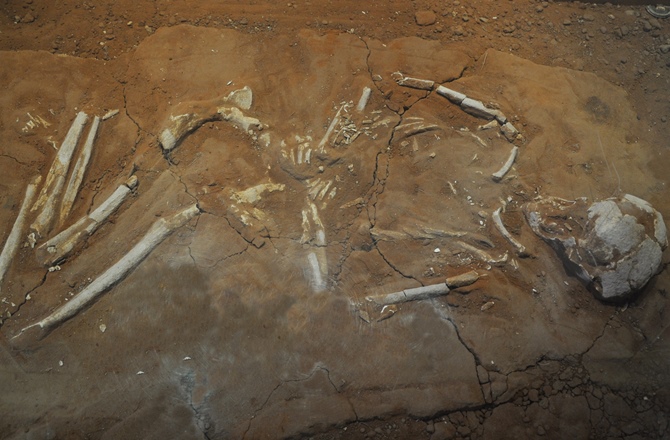 According to deviant burials unearthed at the necropolis of Greek colony Passo Mariano in Sicily, Italy, modern Greeks are not the first generation to fear the walking dead. According to the unique graves that were unearthed in the ancient cemetery, ancient Greeks feared that the dead would rise from their graves and stalk the living.
While excavations were underway in the ancient Greek necropolis, archaeologists found two unique tombs. “One body, found in a tomb labeled 653, contained an individual of unknown sex, who apparently experienced a period of serious malnutrition or illness in life,” noted Discovery.
“What is unusual about Tomb 653 is that the head and feet of the individual are completely covered by large amphora fragments,” Carrie Sulosky Weaver, an archaeologist at the University of Pittsburgh, wrote in Popular Archaeology. “The heavy amphora fragments found in Tomb 653 were presumably intended to pin the individual to the grave and prevent it from seeing or rising,” she added.
Furthermore, archaeologists also found the tomb of a child, labeled 693. It was determined that the child was about 8 to 13 years old and there were no signs of disease found on the remains. However, the child was buried along with large stones that were scattered on its body. “It appears that these stones were used to trap the body in its grave,” Weaver said.
Archaeologists have not yet been able to determine why ancient Greeks went out of their way to make sure that these specific bodies were pinned to their graves. “Necrophobia, or the fear of the dead, is a concept that has been present in Greek culture from the Neolithic period to the present,” she said.
“Although these acts appear to be contradictory, together they provide a powerful testimony to the ways in which the ancient Greeks conceptualized the dead,” she added.