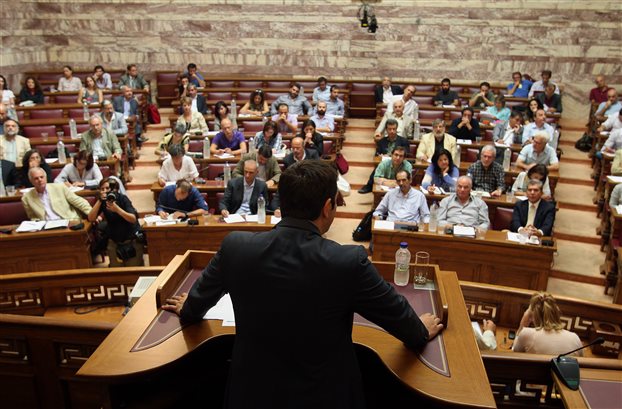 The new Greek proposal that includes an estimated 8 billion euros in tax revenues and reforms in pension laws has caused reactions among several members of the SYRIZA coalition government.
The reactions ranged from mild to extreme, with some SYRIZA MPs expressing reservations and the party’s “left platform” asking to end negotiations and come to a direct rift with creditors and the European Union in general.
“These measures cannot be voted in parliament, they are extreme and go against society,” said Parliament Vice-President Alexis Mitropoulos on STAR television after the new Greek proposals were announced.
SYRIZA MP Yiannis Michelogiannakis also stated on Greek television that he will vote against the proposed deal because it contains austerity measures and goes against the party program.
Government MP Vangelis Diamantopoulos wrote in the social media that the phrase “there is no alternative” does not belong to the Left.
A SYRIZA MP who belongs to the left platform and preferred to remain anonymous said that, “it’s not a question whether SYRIZA can shoulder the measures, it is the Greek people who can’t shoulder them,” adding, “this is the Europe of austerity.”
SYRIZA’s left platform is asking MPs to vote against the new measures and called for an emergency party meeting “to decide the rift with the troika and the Greek capitalist oligarchy, and the change of leadership.”
There were also reactions by junior coalition partner Independent Greeks (ANEL). Pavlos Chaikalis, an ANEL lawmaker said on ANT1 television: “The government has fallen into a trap, I don’t know to what extent this can be implemented.”
Government spokesperson Gavriil Sakellaridis said that the proposed deal is based on social justice. However, he said, “if government MPs do not vote for the deal, the government cannot remain in power.”