No Agreement on Greece But Optimistic Ending to Euro Summit 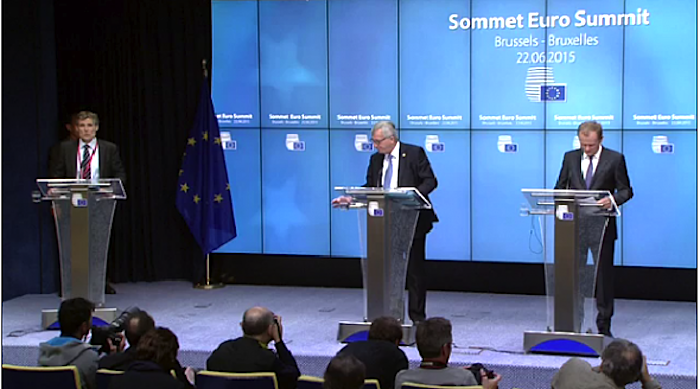 An emergency summit of Eurozone leaders broke up Monday night without an agreement on a Greek rescue, but there was optimism that a deal is very near.
The mood improved thanks to a new Greek proposal that European Council President Donald Tusk called “a positive step forward.”
Tusk said the next steps will be taken on Thursday’s meeting of EU leaders. Greece and its creditors have been in a five-month deadlock over releasing a final tranche of €7.2 billion in rescue funds. If Athens does not get a cash injection very soon, it may fail to repay €1.6 billion to the International Monetary Fund (IMF) due at the end of this month.
The Eurogroup will meet again on Wednesday, Tusk said, and he appeared confident that it will produce results for Thursday’s summit.
German Chancellor Angela Merkel said that all European Union leaders strongly argued in favor of commitments needed for the achievement of a deal between Greece and creditors.
Speaking to journalists at a press conference following the Euro Summit in Brussels, Merkel noted that a lot of hard work still needs to be done in negotiations and that Greece must remain in the Eurozone.
She said that time is running out for a deal, while she added that negotiations with the Greek government concern the sustainability of the Greek debt. The Chancellor noted, however, that Greece will not have to start repaying a large part of its debt for many years to come.
At a separate press conference in Brussels, IMF chief Christine Lagarde told journalists a lot of work still needs to be done in the next 48 hours on Greece, adding that the country’s new proposals are more detailed but do not fully comply with what has been discussed.
The same view was echoed by Eurogroup President Jeroen Dijsselbloem who said that “hard work” is needed.