GRNews
GreekReporter.comGreek NewsEconomyItalian PM and French President Optimistic Over an Agreement Between Greece and... 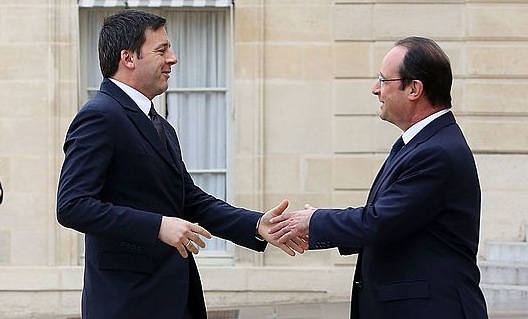 Italian Prime Minister Matteo Renzi and French President Francois Hollande on Sunday, during a press conference given after their meeting in the international exhibition in Milan, expressed their optimism that a solution between Greece and its creditors will be found.
“We are expecting the final discussion tomorrow. Greece has sent new proposals to the institutions and the European Commission. We are not far from an agreement. Greece does not want tougher measures for low-income pensioners, and we can understand that, given the consequences of the crisis. Therefore alternative proposals were requested. If Greece does what it has to do, it will receive the funds and I can say that I am neither optimistic nor pessimistic. Every moment is important,” Hollande noted.
“We need to do everything possible so that Greece remains in the eurozone while respecting its commitments. If Greece exited the eurozone, it would be a negative development for all. The agreement must be comprehensive and long term, because we need stability. We, at this stage, are trying to facilitate as much as possible the deliberations of the institutions with Greece.”
On his part, the Italian prime minister stated that an agreement will be reached provided there is political will. “My sense is that the conditions for a win-win agreement exist. It would be a mistake to miss this opportunity. Therefore, we expect the results of tomorrow’s emergency summit.”
Renzi also added: “We want Greece to stay in the eurozone, for its own good, but also for the good of the eurozone and the community.”
(source: ana-mpa)