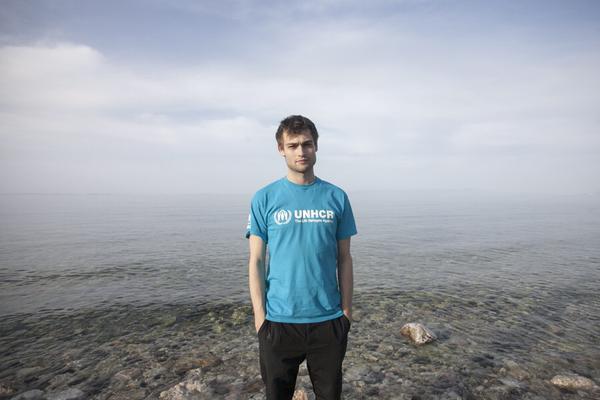 Young British actor Douglas Booth -known for his roles in films such as “Romeo and Juliet” and “Noah” where he starred alongside Emma Watson and Russell Crowe- visited the Greek island of Lesvos. Booth, a UNHCR supporter, visited Lesvos to meet with refugees staying on the island after having survived the treacherous Mediterranean Sea crossing that has cost the lives of many migrants and refugees trying to reach Europe -via Greece- in search of a better future.
Furthermore, the 22-year-old actor visited Thessaloniki, northern Greece, in order to attend TEDx Thessaloniki and watch Melissa Fleming, UNHCR’s Chief of Communications, give a moving speech about a tragic mass drowning off the shores of Crete and the astonishing heroism of one young refugee girl who became a savior on the seas.
“The fact is that the vast majority of people crossing the Mediterranean are escaping persecution and war. They are refugees. The people I met on the island of Lesvos – who had arrived on overcrowded, barely sea-worthy boats just a few hours before – had no option but to flee their homes. It wasn’t a choice for them – stay and likely die, or leave behind everything they have ever known and loved in order to survive,” noted the young actor after his visit.
“The people I met have endured terrible suffering, loss, heartbreak and fear. They look to Europe for protection. They look to Europe for safety. Yet they are too often met by prejudice, ill-will, hostility, intolerance and anger. I urge people to take some time – even just 5 minutes – to look beyond the headlines and get to know one of the millions of people around the world who have been forced to flee their home. Read or watch a short film of a refugee story, talk to a refugee in your community. Take time to understand where these people – people just like you and me – have come from, the horrors they have escaped, the journey they have undertaken, the life they have to rebuild from scratch, the hopes they have for the future. I know, like me, you will recognize yourself and your family in them, and understand that refugees are not ‘other’ – they are ordinary people going through an extraordinary hardship,” he concluded.
The United Nations High Commissioner for Refugees (UNHCR) is a United Nations agency that aims to protect and support refugees and assist in their voluntary repatriation, local integration or resettlement to a third country. The UNHCR has won two Nobel Peace Prizes, in 1954 and 1981. In the past, Booth has supported UNHCR’s Syria Crisis Appeal and the iBelong campaign to end statelessness.