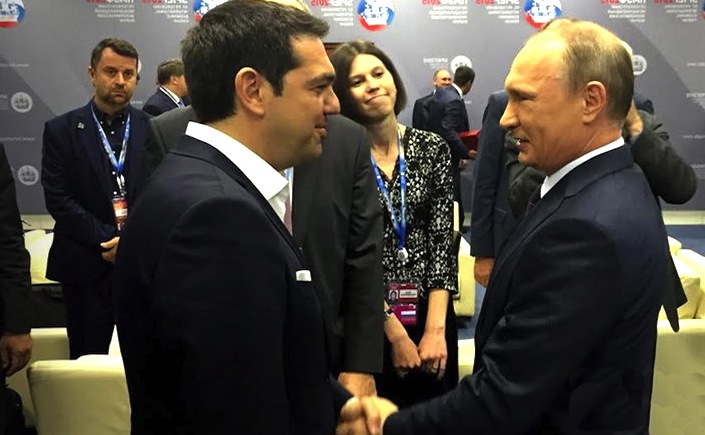 As Greece is struggling to reach an agreement with creditors in order to secure financial aid and avoid defaulting on its debt at the end of June, Greek Prime Minister Alexis Tsipras travelled to St. Petersburg, Russia, to attend the International Economic Forum and meet with Russian President Vladimir Putin on Friday evening.
After attending Tsipras’ impassioned speech against austerity, the Russian President, responding to a question about the current financial crisis that tantalizes Greece and may even lead it out of the Eurozone, said: “As rightly Mr. Tsipras says, the problem of the crisis is not Greek, it is European,” adding that “it is not a Greek problem, but a creditors’ problem.”
Tsipras referred to the importance of building ties between Greece and Russia. “One of the steps we should take is to work hard from now until November to draw up a memorandum of cooperation,’ he stated.
“We live in challenging times… I think that the cooperation between the two countries can help to effectively confront these challenges, serve the common goal of prosperity and economic development, as well as secure a stable and attractive environment in our region,” he added.
Putin reassured that Greece is an important partner of Russia in Europe. “We adopted a common action program in April and it is important to apply it in practice,” he noted, welcoming at the same time the Greek side’s initiative to prepare a joint document on strengthening economic cooperation between the two countries.
Meanwhile, Kremlin press spokesman Dmitry Peskov denied that Putin and Tsipras discussed financial aid for Athens during their meeting on the sidelines of the St. Petersburg International Economic Forum.