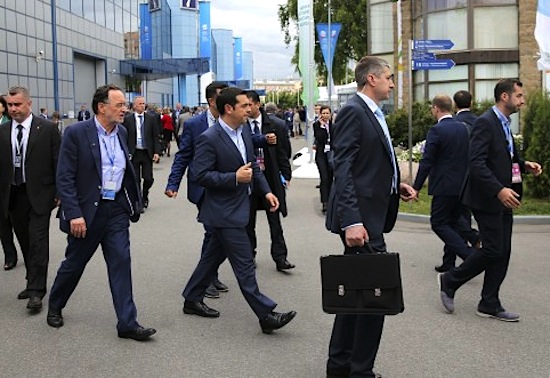 Greek Prime Minister Alexis Tsipras discussed energy and the “Greek Stream” gas pipeline project with Gazprom chief Alexei Miller during a meeting in St Petersburg on Thursday.
Tsipras also met with representatives of the new development bank for BRICS countries, who expressed their intense interest in cooperating with Greece.
The Greek Prime Minister was accompanied by Productive Reconstruction, Environment and Energy Minister Panagiotis Lafazanis, while the BRICS delegation included its chief, Kundapur Vaman Kamath, IMF’s Executive Director and new Vice President of the BRICS bank Paulo Nogueira Batista, Russia’s Deputy Finance Minister Sergei Storchak and the head of state bank Vnesheconombank (VEB), Vladimir Dmitriev.
Speaking later to Greek businessmen participating in the 19th International Economic Forum in St Petersburg, Tsipras urged them to “open their wings in open seas despite the storms.”
“In difficult times, Greek businessmen can be pioneers in opening new horizons…You should pull us from the sleeve. We have to free ourselves from the routine of everyday life and open up new horizons, despite the economic crisis that has lasted five years and the tough negotiations of the last four months,” he noted.
“Greece is at a difficult point, and to overcome it, it needs to ‘divorce’ the illnesses of the past,” he added.
(source: ana-mpa)