GRNews
GreekReporter.comGreece3,000 Migrants Disembarked in Athens Port in One Week

3,000 Migrants Disembarked in Athens Port in One Week 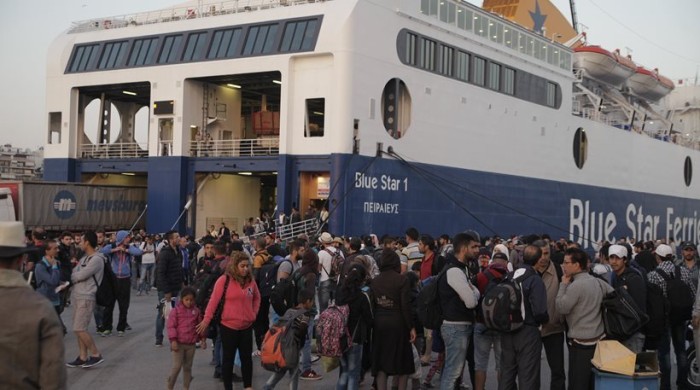 Migration in crisis-stricken Greece is an issue of concern which has been recurrently coming to the forefront in different guises. The last few months, however, the flow of undocumented immigrants has eluded all limits and Greek coast guard officials do not know how to address the issue. The problem continues to swell rather than to be approached and gradually resolved, as the relentless flow of arrivals overwhelms local services and infrastructure and the central government seems to ignore the pleas of the local mayors for support fueling tensions.
Approximately 700 migrants, coming mainly from the islands of Mytilene, Chios and Kos, have arrived in the port of Piraeus only this morning, while 3,000 refugees have approached the capital of Greece, Athens, in one week.
Deputy Citizen Protection Minister Giannis Panousis commented on the issue during his meeting with the President of the Hellenic Republic Prokopis Pavlopoulos on Thursday: ” The Greek management of the migration problem reflects our European culture and European humanism.” And he continued: ‘This period we are the ones to teach Europeans how we manage these flows of refugees within the economic crisis. Europe on its part, does not consist of a paradigm for others concerning the way it handles Greece.”
Mayor of Athens Giorgos Kaminis also expressed his concerns over the migration problem in Greece. “There is no organization, no method, no program. I am afraid that things are not progressing at all,” said Kaminis, adding: “The state was unprepared to accept this wave although it knew about it.”