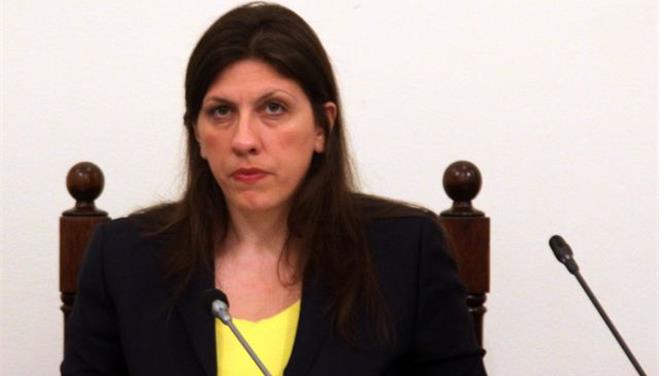 House Speaker Zoe Konstantopoulou called the yearly Bank of Greece report on fiscal policy “unacceptable” and accused the bank governor of “uninhibited interventionism” as she returned it.
Earlier today (Wednesday) the Bank of Greece 2015-2015 fiscal report was made public. It was presented to parliament by Bank of Greece director Yiannis Stournaras. However, when the report was presented, the special parliamentary committee investigating the Greek debt issue was in session.
“Mr. Stournaras tried to sneak in the report at 10:40 am today in a way which doesn’t follow protocol while the Truth Committee was presenting its primary findings,” Kosntantopoulou said.
“Mr. Stournaras has contributed to the fiscal, memorandum-based policy and has overstepped his position when the presidential elections were underway. He now tries, in a non-democratic way, to prevent the ultimate debt write-off claims of the government.,” she added.
Konstantopoulou verbally attacked Stournaras, returned the USB stick with the report and asked him to bring it back in printed form. “This parliament does not use USB sticks. There were others having USB sticks in their desks and pockets,” she allegedly said, hinting at the USB stick that contained the infamous Lagarde List of tax evaders that was tampered with by the previous government.
The fiscal report warns the government of the dangers of not signing an agreement with creditors, saying that Greece might go bankrupt and subsequently might be forced out of the Eurozone. It further says that recession will follow if there is no deal and Greece might end up a poor country of the European South.