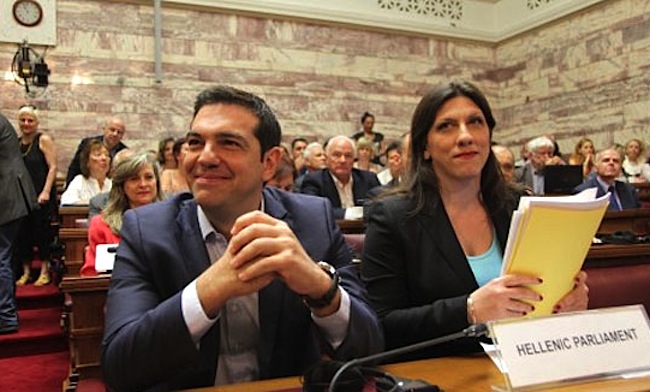 The debt imposed on Greece and its residents by creditors directly infringes the human rights of Greeks and is “illegal, illegitimate and odious,” according to the preliminary report issued on Wednesday by the Audit Committee on Public Debt.
The Greek Parliament earlier released a six-page summary of the Committee’s preliminary findings during hearings conducted since April, when it was convened by Parliament President Zoe Konstantopoulou.
The summary stressed that the entire adjustment program imposed on Greece “was and remains a politically orientated program,” while challenged arguments that the policies imposed on Greece aimed to improve its capacity to pay back the debt.
It concluded that Greece was the victim of a “premeditated and organized” attack and of a “violent, illegal, and immoral mission” to shift private debt onto the public sector.
“All the evidence we present in this report shows that Greece not only does not have the ability to pay this debt, but also should not pay this debt first and foremost because the debt emerging from the Troika’s arrangements is a direct infringement of the fundamental human rights of the residents of Greece. Hence, we came to the conclusion that Greece should not pay this debt because it is illegal, illegitimate and odious,” the report said.
Among others, the report noted that the unsustainability of Greece’s debt was evident to all involved from the outset, yet Greek authorities and other European governments, with the assistance of the media, had “conspired against the restructuring of public debt in 2010 in order to protect financial institutions.”
(source: ana-mpa)