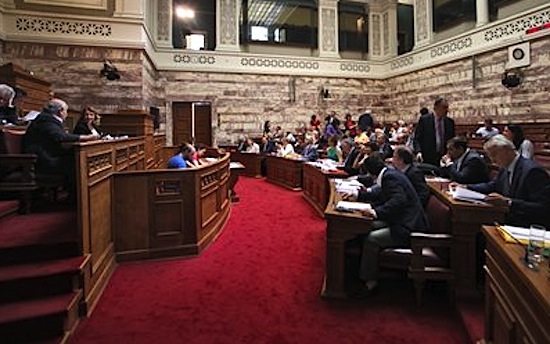 A restructuring of Greece’s debt is absolutely essential, otherwise the chances of a recovery for the country are extremely slim, political economist Philippe Legrain said, in a public hearing before the “Debt Truth” Committee in the Greek Parliament.
A one-time advisor to former European Commission President Jose Manuel Barroso, Legrain said that the main reason why debt restructuring was not the solution chosen for Greece’s problem was a desire to avoid damages to French and German banks.
He also slammed the economic program imposed on Greece as “barbaric,” saying it was based on “mistaken assumptions” and had led to inhumane conditions for Greeks. Supplying additional financing to pay off previous debt, coupled with additional austerity as a condition for this financing, benefited repayment but not the Greek people, he added.
The economist said that at the start of the Greek crisis, the IMF had pushed for debt restructuring but this was resisted by Eurozone officials, particularly ECB President Jean-Claude Trichet, German Chancellor Angela Merkel and former French President Nicolas Sarkozy. Working with the former IMF Managing Director Dominique Strauss-Kahn, they decided to “pretend” that Greece had a liquidity problem rather than an inability to pay its debts.
They agreed to lend Greece as a show of “solidarity” but essentially in order to save French and German banks, as well as other investors that would suffer significant losses on these debts, while the ECB had “bent” the rules to the maximum by buying up Greek bonds.
According to Legrain, what happened was the bailout of Greece’s creditors, not the bailout of Greece, and this was proved by the flow of capital. He pointed out that nine in every 10 euros given to Greece was spent on paying off loans and not used within the country.
The Debt Truth public hearings will continue on Monday with the testimony of Greece’s former IMF representative Panagiotis Roumeliotis, while the Committee’s preliminary conclusions will be announced on June 17-18. The Committee on the Truth About Public Debt was set up by Parliament President Zoi Konstantopoulou in order to conduct a detailed audit of the debt and examine its legitimacy and legality.