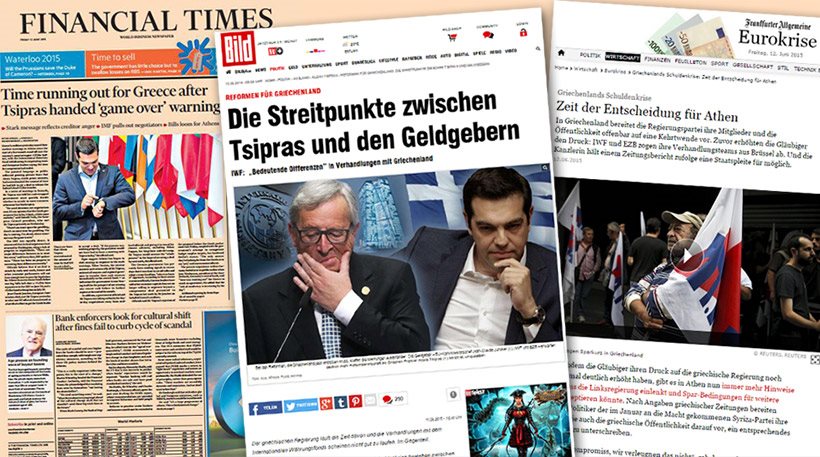 According to foreign media reports, German Chancellor showed her discomfort after her last meeting with Greek Prime Minister Alexis Tsipras in Brussels. The German chancellor is now considering the possibility of a Grexit as time is running out. Every day counts and there are still several differences to settle with Greece’s creditors. The IMF’s departure from the negotiating table has strained the relations of the Greek government with its creditors.
The German Frankfurter Allgemeine Zeitung note that European officials are losing their patience, while the ball is now in Greece’s court. Furthermore, the newspaper noted that the IMF’s departure from the negotiations shows that no progress has been made and time is running out for Greece.
Bloomberg mainly focuses on Greece’s geopolitical importance. “Greece’s trump card historically has been its location at NATO’s southeastern flank. As Islamic State gains to the south and east, Russia encroaches to the north and migrants flood to Europe, the question is whether Greece is worth more than the billions it needs to get out of its financial hole,” noted the article.
In other publications, Bloomberg mentioned an article published in the German newspaper Bild, according to which Germany is preparing for a Grexit. “Tusk abandoned his neutral position as a broker of EU compromises to signal Greece’s creditors are preparing to hand Tsipras an ultimatum. The creditors have grown exasperated with the Greek leader’s refusal to bow to their demands, risking a default and ultimately an exit from the currency bloc, with potential consequences beyond the country’s borders,” noted Bloomberg.
Meanwhile, the Financial Times reports that the creditors gave Greek Prime Minister Alexis Tsipras an ultimatum. “The time for compromise has ended,” noted the country’s creditors. “We need decisions not negotiations now. It’s my opinion that the Greek government has to be, I think, a little more realistic,” said the European Council President Donald Tusk. According to the financial newspaper, the Greek government is preparing “for the prospect of not winning any rescue cash before its bailout expires at the end of the month.”
Finally, the Guardian noted that “the IMF’s message was short and brutal. There were still major differences between Greece and its creditors. There was no progress in narrowing those differences. The two sides were well away from an agreement.”
“The IMF, clearly, has had enough. It was unimpressed by Greece’s decision to bundle up all four of the debt repayments due this month and is frustrated by the unwillingness of Alexis Tsipras, the Greek Prime Minister, to cross its two “red line” issues – pensions and labour-market reform. This, then, is the IMF holding the gun to Alexis Tsipras’s head. It feels like a pivotal moment, the point where the creditors are saying “take it or leave it” and the Greeks have to decide whether the IMF really means it.”

Grateful recipients would like to at least be able to know if they can still spread the virus to others after they receive their inoculation.
Environment

Greece will create a massive new administrative park near mount Hymettus, it was made public on Saturday.