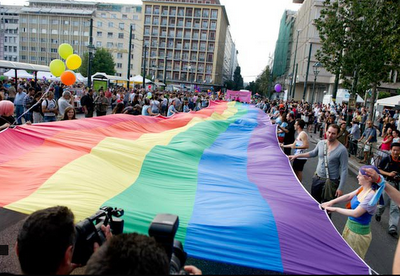 The Greek Justice Ministry posted the draft bill that extends civil partnership agreements to same-sex couples but doesn’t allow adoption for pubic consultation.
In a statement accompanying the bill, the Ministry said the new law aims to include homosexual couples and correcting “gray areas” of the existing law.
“Seven years after the establishment of the civil partnership agreement that excluded same-sex couples and a year and a half after our country was convicted at the European Court of Human Rights, we present a modern institutional framework that regulates partnerships,” the statement said.
The Ministry said the bill constitutes a landmark for two reasons: The first is that it lifts discriminations against citizens due to their sexual orientation and allows for institutional recognition of personal relationships, which were far into a gray area of institutional denial, going against the principles of equality, free development of personality and respect for diversity.
The second reason, said the Ministry, is the overall improvement of the civil partnership by recognizing family ties between parties, which strengthen it.
(source: ana-mpa)