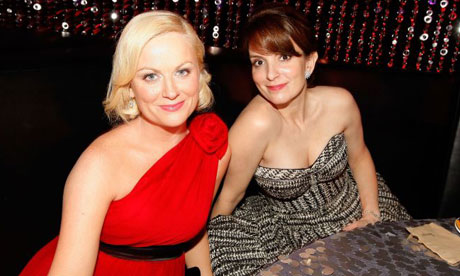 Tina Fey was one of the many comedians who showed up to honor and roast Steve Martin at the American Film Institute’s 43rd Annual Life Achievement Award ceremony in his honor. The event was held at the Los Angeles Dolby Theatre.

Amy Poehler, Tina Fey’s long-time partner in crime, was also on hand as well as Mindy Kaling, Sarah Silverman and Maya Rudolph. Most of the women have worked with Steve in films on the past, so they were the perfect choices to honor the actor’s Life Achievement Award.

Tina Fey starred with Steve Martin and Amy Poehler in “Baby Mama”, and has known the actor for a while.

She started the roast by saying: “I learned so much from you, Steve. I can’t tell you how grateful I am,”; and then continued with the punchline “Marrying a woman who is a younger, slimmer, smarter version of me.”

Some of the funniest men in Hollywood also chipped in to help roast Steve Martin, including Jack Black and Conan O’Brien, and Steve Carrell.

For viewers who want to see the ceremony at home, the show will air on TBS on Saturday, June 13.