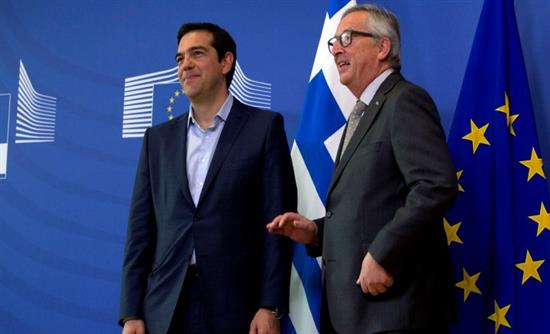 Several of the measures proposed by creditors in order to achieve an agreement belong to the “red lines,” thereby they were rejected by Greek Prime Minister Alexis Tsipras in the early morning hours on Thursday in Brussels.
“Greece cannot consider further cuts in pensions or raising the VAT in electricity bills by percent,” Tsipras announced after meeting with top European Commission officials and International Monetary Fund (IMF) representatives. Creditors presented the Greek PM with the list of proposed measures in order to come to an agreement over Greece’s debt.
Tsipras met with European Commission President Jean-Claude Juncker, Eurogroup President Jeroen Dijsselbloem, Euro Working Group (EWG) President Thomas Wieser as well as IMF and European Central Bank (ECB) representatives.
Greece’s creditors proposed the abolition of the Pension Social Solidarity Fund (EKAS) that is received by around 250,000 pensioners who receive less than 700 euros. This would save Athens 400-500 million euros.
They also proposed raising value added tax on power bills to 23%, now at 13%. Also they suggested 11% VAT on food staples, medicine and books, now at 6.5%. They estimated that would save 528 million euros. They also asked for the abolition of the 30% VAT reduction on the Aegean Sea islands, which could bring around 347 million euros.
Creditors also suggested maintaining solidarity contributions on incomes over 30,000 euros per year.
On labor market reforms, creditors suggested mass layoffs and the abolition of collective bargaining. They also want Athens to dismiss all public sector employees who were fired and rehired recently. As for pension laws, they suggested the government puts an end to early retirement.
The Greek government is willing to make concessions on certain of the above proposals but some belong to the red lines the Tsipras administration refuses to cross.
However, Juncker’s side denied that some of the above harsh measures, such as the EKAS abolition and the power bill VAT increase, were presented to the Greek team. According to a real.gr report from Brussels, all creditors’ representatives in the meeting denied that such measures were proposed. Allegedly, one person close to the talks said, “The Greek side must find measures to close the fiscal gap and not create division with leaks.”
The Greek team presented its own list of proposals, “the only realistic and constructive plan” as Tsipras called it.
“There was proof from the Commission that it is at least disposed toward reaching a realistic agreement very quickly,” Tsipras said. “The more we talk sincerely, the closer we will get to a mutually acceptable solution,” he added.