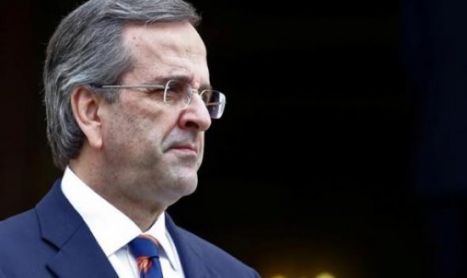 Main opposition New Democracy (ND) leader Antonis Samaras said on Thursday, June 4 that speculations over elections are nonsense. Samaras also called on Greek Prime Minister Alexis Tsipras to participate in a wide national consensus.
Samaras also noted that Tsipras’ “supposedly successful negotiation collapsed last night. The proposed measures, as the government ministers have admitted, are much harder than Hardouvelis’ measures,” adding that “Tsipras’ cost to the country is now huge, not only in VAT rates, electricity, the private sector etc, but mainly on reliability. The mockery and lies are over.”
Furthermore, he asked for people to stop talking about early elections noting that it is “nonsense.” He explained: “If elections were held now it would be under hard and unprofitable conditions for the Greeks. Not to mention that they would drive us to a worse point than where we are now. Besides, what is SYRIZA asking for? The people’s mandate to return to the drachma? Maybe that was their initial goal after all.”
“The only thing left for Tsipras is to participate in a wide national consensus just as we had proposed. This is the only path for the country,” he concluded.