“A Night in Athens” at the LA Greek Film Festival 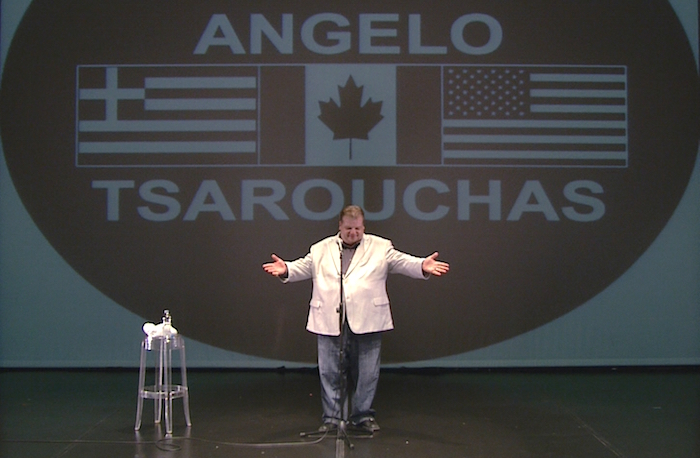 “A Night in Athens” is a film about comedian Angelo Tsarouchas’ one hour stand-up performance in
front of a sold-out audience at the Michael Cacoyiannis Foundation theater in Athens, Greece. The film
will have its world premiere at this week’s LA Greek film festival on June 7 at the famous Egyptian
Theater in Hollywood, CA. His performance is a hilarious take on Angelo’s challenges growing up Greek thousand of miles away from Greece.

The film fulfills a lifelong wish of Angelo’s father for his son to perform in Greece. This is the second
project following the filming of his documentary “Back to Sparta,” a personal story of triumph for Angelo
who made a comeback after suffering personal and professional setbacks and an exploration of his
father’s birthplace of Dafni, Lakonia.

During our lunch we talked about his projects, his love for Greece and of course his success as a standup
comedian. Angelo who is now known as the “Funny Greek” told me that his path to success was a
difficult one. In his profession there is no formal training and the only way to learn is by performing.

On stage to an audience that sometimes remains silent, is a tough way to break in. His determination
and his persistence eventually paid off. Today he tours regularly around the globe and he can boast that
his one hour Showtime special “Bigger is Better” was watched by over 14 million viewers. He expressed
his satisfaction of completing these two projects and how happy his father would had been. To honor
his father’s memory Angelo donated all of the proceeds from the event to local charities in Athens.

Angelo was thrilled by the enthusiastic reception he received from the sold-out audience in Athens and
he was also amazed that 150 people showed up to a subsequent comedy workshop he did the next day.
He feels very proud by the way the Greek Diaspora supports him and shows up to his stand-up
performances all over the world. He also performs regularly with Vince Vaughn’s “Wild West Comedy
Show.”

When he is not on tour or donating his talents for a good cause you can find Angelo performing
and testing new jokes at the Laugh Factory in Los Angeles. For future live performances you can visit his
web site.

The Funny Greek has also made a successful venture into acting as well, winning a Best Actor Award at
the London Greek film festival for his role as Vinnie D’ Angelo in the film “Fred and Vinnie.”

The Los Angeles Greek Film Festival is taking place at the Egyptian Theater in Hollywood June 3-7, and Angelo believes it will be the perfect place to host his film’s world premiere.