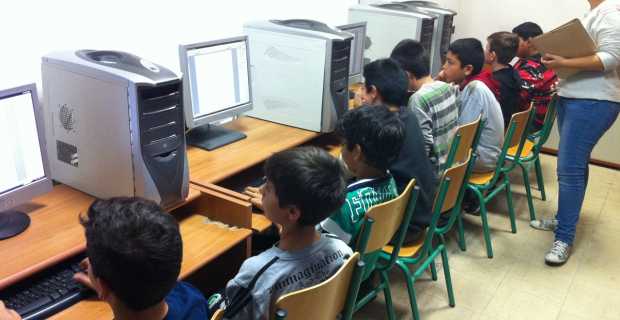 Thanks to the initiative of 17-year-old Greek-American Aristotelis Aslidis, who managed to raise 5,000 dollars and purchase computers, the lives of 150 Roma children in Thessaloniki, northern Greece, will change.
Aslidis, a New Jersey resident, launched a web campaign – an initiative that was organized under the auspices of Pylea municipality. The campaign aimed at raising funds for purchasing computers for the children who live at a Roma children protection center in Thessaloniki.
On March 29, Aslidis opened a campaign at the crowdfunding platform IndieGoGo setting the goal of 5,000 dollars, which was successfully completed on May 28.
Archimandrite Athenagoras Loukataris, founder of the Roma children protection center, expressed his satisfaction for the campaign’s success and young Aristotelis’ efforts. “These computers are likely to be accommodated in a 50-square-meter room, located in the 3rd primary school of Ambelokipoi-Menemeni municipality. We also want to house our radio station studio and all our workshops there,” noted Archimandrite Athenagoras.
The 17-year-old Greek-American originates from Thessaloniki and visits the Dendopotamos area during the summer season, when he also does a lot of volunteer work. The young man got to know the area through his volunteer work almost three years ago, when he was just 14 years old. Since then, he has gotten attached to the area but also to the kids living in the protection center.
Aslidis’ initiative will offer the children a chance to become familiar with technology and develop their skills in informatics, offering them a variety of opportunities for the future.