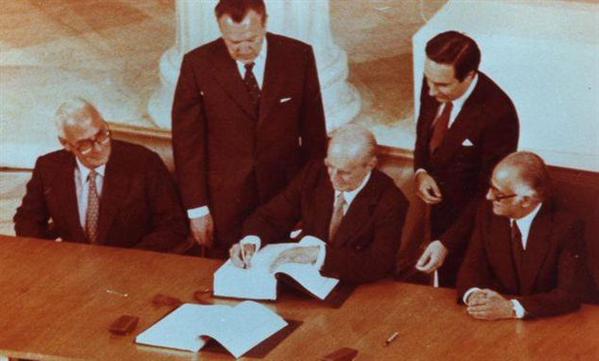 It was 36 years ago today when Greece’s Prime Minister Constantine Karamanlis was putting his signature to the historic Treaty of Accession to the European Economic Community, as the European Union was called at the time.
It was May 29, 1979, when the treaty was signed, but negotiations had begun in 1976 and were completed in May 1979. The agreement was ratified by the Greek Parliament a month later, on June 28, 1979.
Karamanlis was the first Prime Minister of the restored Greek Republic after the fall of the military junta in July 1974. He believed that Greece’s entry in the EEC would solve the country’s biggest problems, namely lack of economic development, social insecurity and political instability, while at the same time it would safeguard democracy. Also, Greece as an EEC member would be one of the decision makers in the process of unifying Europe.
Greece ‘s relationship with the EEC had started in June 1959, when Athens had applied for entry. In June 1961 an Association Agreement was signed between Greece and the EEC. However, the process of accession was interrupted by the dictatorship in April 1967. The Association Agreement was put into effect again after democracy was restored.
Karamanlis wanted Greece to be a full EEC member and the request for full membership was submitted on June 12, 1975, in a letter that Karamanlis sent to the then Chairman of the Council of the European Community Ministers, Ireland’s Foreign Minister Garret Fitzgerald.