Friends often ask me to opine on the Greek debt crisis. They are looking for some insight into what is going on and why the country is at the brink of bankruptcy. I suppose they think my heritage makes me more qualified to offer such insight.
The Greek crisis in many ways is a simple story; the predictable outcome of policies and cultural idiosyncrasies. So here is an attempt to tell the story with a few charts:
1. Define it. Why is Greece in trouble? 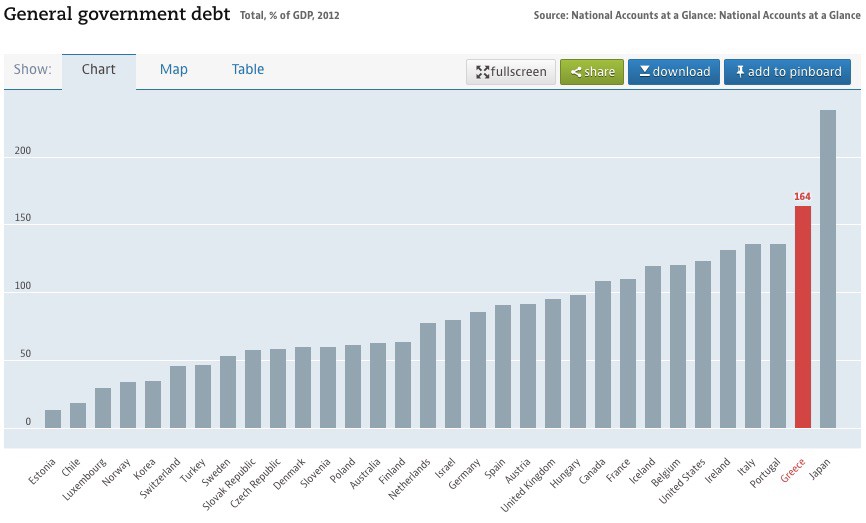 2. Did Greece get in trouble because Greeks don’t work hard (“you know, with those long siestas over lunch”), kind of like the Germans? No. 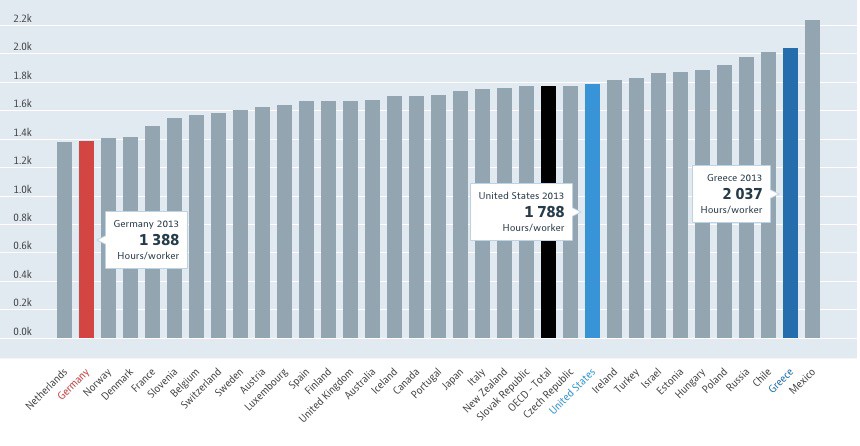 3. So, if the Greeks work so hard, how come they don’t produce enough to cover their obligations? 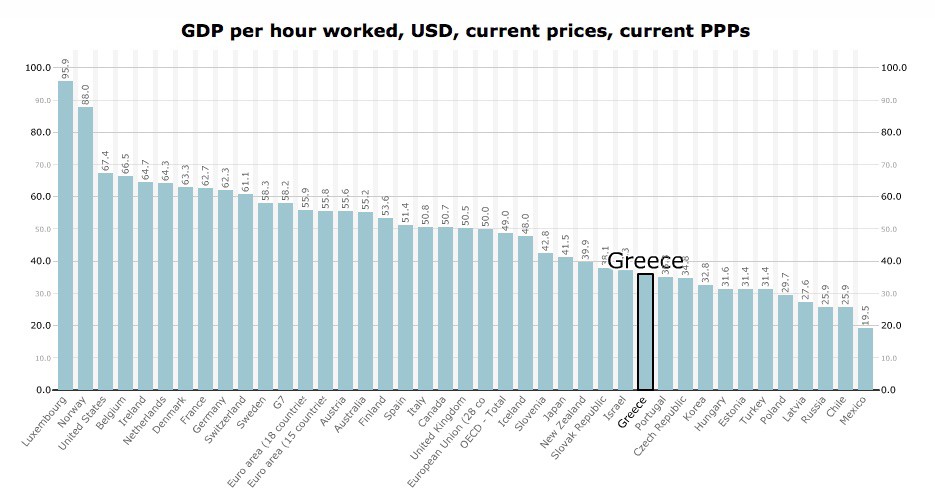 4. Why is productivity so low? Over the years, politicians have grown the size of government. They also love to regulate. Over the last 30 years they have passed 4,000 new laws and issued about 110,000 ministerial directives. You need a lot of people to enforce these laws. Public servants in Greece get lifetime tenure!! Politicians loved growing the government to curry favor with voters.

5. At the same time, Greeks love to strike to fight for more benefits. Politicians were happy to offer more.


6. Speaking of state favoritism, how about corruption in general? Greece ranks at the bottom within the EU.

7. On top of that, on average Greeks retire earlier…

8. And thus have a higher dependency support ratio (ratio of number of people aged over 65 plus kids up to 15 per 100 persons of working age between 15–65). In reality, this significantly underestimates the true dependency ratio, since the country suffers from high rates of youth unemployment and many people retire before the age of 65. In other words, too many people depend for their livelihood on the too few who work.

9. At the same time, the government is not bringing in enough revenues. How do we know this? Greece has the largest – as percentage of the economy – shadow or underground economy.

10. How can they escape taxes? Most of the people work for tiny businesses who conduct private cash transactions that can more easily be hidden.

11. And by the way, the number of those businesses in going down…

12. While the VAT taxes remain high relative to others in Europe… 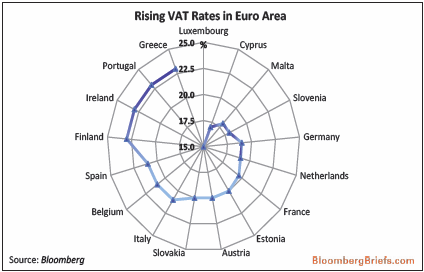 13. So, to sum it up Greece doesn’t seem to be a great place to do business. 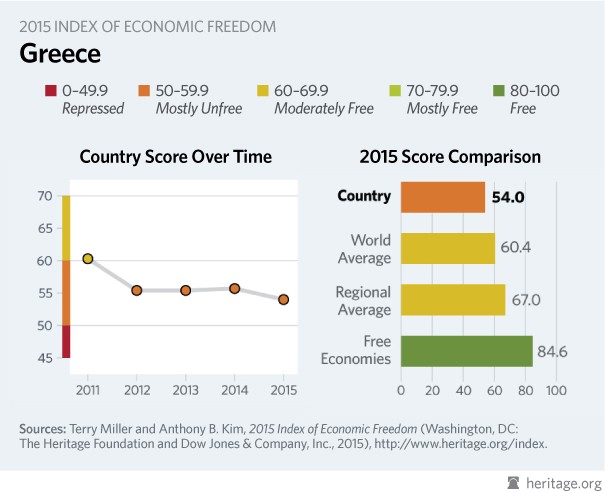 17. Say, what happened in Q4 of 2014? Looking at Chart 15 you might appreciate why Greeks were fed up with ongoing non-stop austerity measures. So they decided to elect a radical left coalition party that promised to undo the former policies. However, it seems consumers don’t have much confidence that the new leftist government will be able to reach an agreement with its eurozone partners. 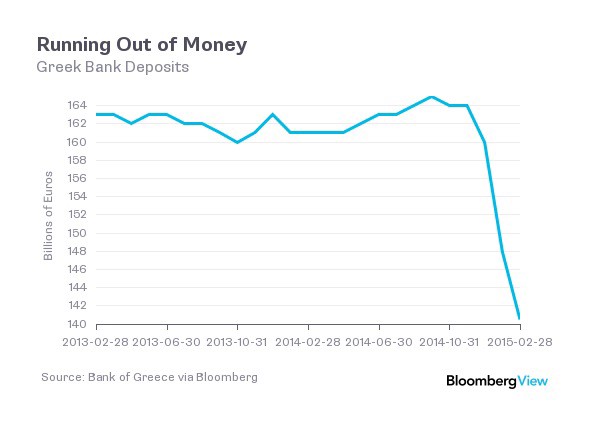 18. As fears also grew among investors, the cost of borrowing from the markets spiked… 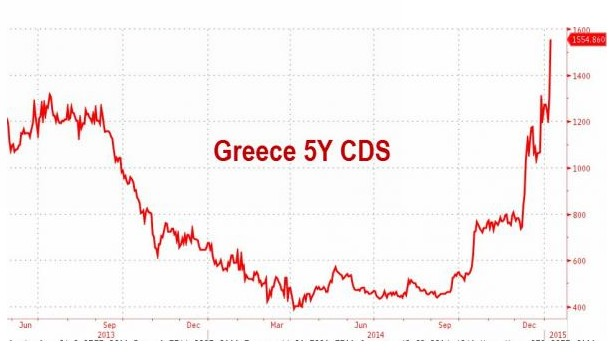 19 a. What does Greece need to do? Here is a list of policy recommendations from OECD for sustainable recovery, similar to the spirit of the reforms proposed by Greece’s EU partners.

19 b. To date, the Syriza government has not shown any signs of agreement with the eurozone partners, choosing instead to comply with campaign promises of undoing many reforms by the prior government. Some in the left coalition government are openly advocating a default, exit from the Euro and return to the drachma. In fact, there are some economists who say this would be best for Greece as it would enable it to become competitive in global markets. While good in theory in an open well-functioning economy, the first time Greece elected a socialist government that followed similar policies, the drachma had quite a ride, downwards… 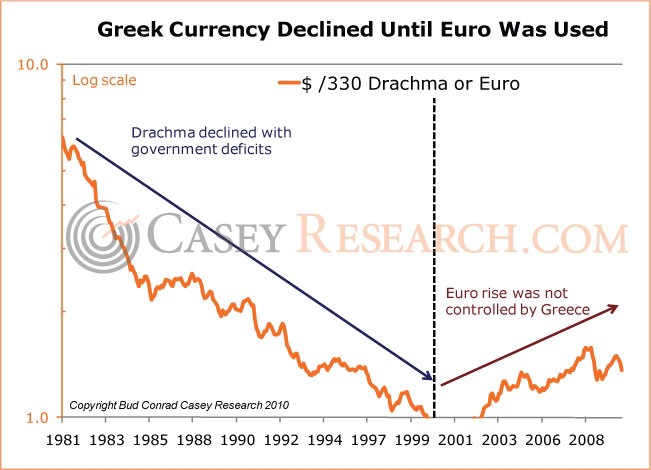 20. In this era of uncertainty, businesses and investors have postponed investments and reversed economic growth, prompting the European Commission to slash growth estimates.

At this point, the future is indeed uncertain. Will the Syriza government agree to EU/IMF conditions for further loans and implement the program or choose to gamble with an exit from the Euro? We are days or weeks away from finding out.
*Thanasis Delistathis is the founder and managing partner of New Atlantic Ventures, an early-stage venture capital firm based in the Washington DC Metropolitan Region and Cambridge, Massachusetts. He has invested in entrepreneurs whose technology brought text messaging mainstream in the United States, movies to the Web, radio to your phone and the ability to buy couture straight from the runway.