GRNews
GreekReporter.comGreek NewsEconomyVaroufakis to NYTimes: 'I am Terrified of the Greek Crisis'

Varoufakis to NYTimes: 'I am Terrified of the Greek Crisis' 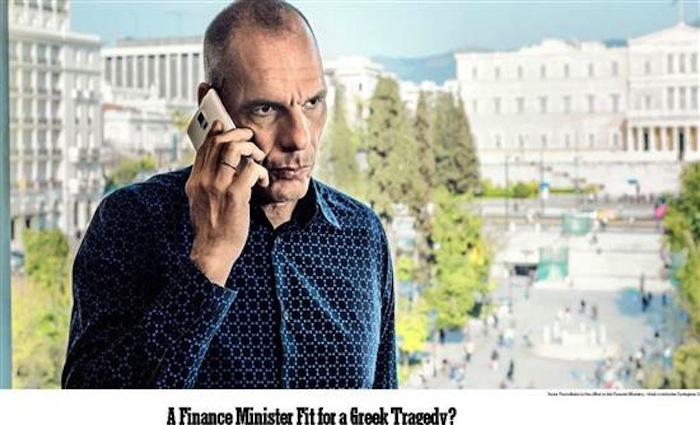 A new article about Yanis Varoufakis, the “pugnacious economist” with the sardonic smile who has been screaming of the dangers of a humanitarian crisis in Europe, entitled “A Finance Minister Fit for a Greek Tragedy?“, was published in the New York Times on Wednesday.
New York Times journalist Suzy Hansen composed an all-inclusive article about the Greek Finance Minister, after spending a considerable amount of time with him and his wife in early May. Hansen builds Varoufakis’ profile as an enigmatic yet powerful and energetic personality who is amidst the eye of the financial cyclone.
Hansen was able to talk to Varoufakis soon after another one of his European trips, during which he warned his fellow European leaders that they are facing a Continental crisis.
The journalist wrote that Varoufakis revealed during the interview that he has recorded the Finance Ministers meeting in Riga, Latvia, but he was not able to disclose any further details for confidentiality reasons.
Varoufakis stated during the interview: “I’ll be damned if I will accept another package of economic policies that perpetuate this same crisis. This is not what I was elected for.” And he continued: “There’s no doubt that this economy now is far worse off in the last two months as a result of our hard bargaining.”
In addition, when asked if he was worried about the Greek economy, although he thinks that hard bargaining involves a short-term cost, he said he was “terrified and aghast.”