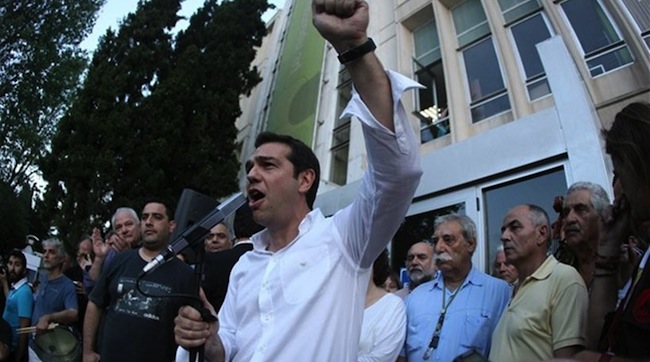 Greek Prime Minister Alexis Tsipras met with newly appointed director Dionysis Tsaknis and CEO Lambis Tagmatarchis of national broadcaster ERT, which had been renamed NERIT by the previous government, and announced that it will reopen next Monday, May 25.
Tsipras informed the two men that ERT is officially reopening next Monday and suggested that their first priority should be the orderly return of former employees, who had been laid off, to work.
The Greek premier said that ERT should set new standards in public broadcasting, be pluralistic and independent. He also asked them to restore Greek people’s faith to the national broadcaster and provide good programming for all.
Tsipras also asked for fair and objective reporting of news, suggesting that ERT should be objective, not a government mouthpiece, and should not be afraid to criticize government policies when necessary.
Finally, he asked them to be present at the ERT headquarters’ courtyard celebration on June 11, the anniversary of the national broadcaster shutdown in 2013.