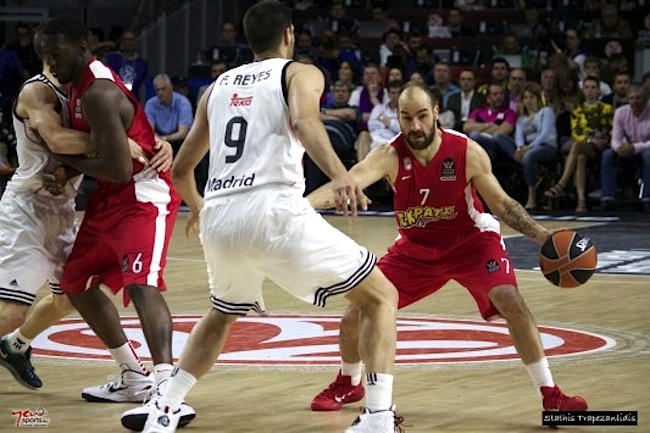 Olympiacos lost its chance to win a 4th European Basketball Championship, as Real Madrid​ beat the Greek team 78-59 and became the 2015 Euroleague Champion.
With more than 2,000 Greeks on their side, the Piraeus team was able to sporadically stun the Spanish defense but with no lasting results.
This is Real’s first title after 20 years in their participation in the Euroleague with 8 titles so far, 5 more than Olympiacos.
Olympiacos made a furious comeback around the 4th minute of the 3d quarter, cutting the distance from 40-29 to 40-41 in just a few minutes. However, the score became 49-43 just a few seconds before the end of the third quarter and Olympiacos lost more ground, with 78-59 being the final score.
Former Houston Rockets player Vassilis Spanoulis, who led his team to the finals with a last-minute 3-pointer against CSKA, showed, once again, a remarkable performance, however it was not enough to lead his team to the European crown.
The quarters:  15-19, 35-28, 53-46, 78-59