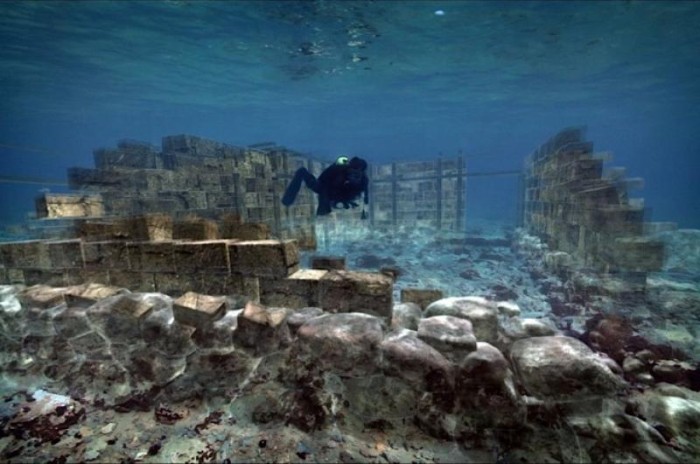 Pavlopetri is an ancient Greek city that has been submerged off the coast of southern Laconia in Peloponnese, Greece, by a series of consecutive earth tremors around 1,000 BCE and consists the oldest underwater archaeological town site in the world, dating back 5,000 years.
The ancient Greek submerged city of Pavlopetri is visible at a depth of around 4 meters under the sea, between Pouda beach at Viglafia and the islet of Pavlopetri in the southern Laconia coast of Greece, and was first discovered back in 1904.
Pavlopetri thrived for 2,000 years during the era of the birth of western civilization, meaning this is a UNESCO world heritage site, particularly rich in history. Owing to the fact that its location was unknown until 1967 and that it remains relatively inaccessible, the city is incredibly well maintained. The site also remains uniquely interesting to oceanographers and historians due to its intricate design and advanced infrastructure that surpasses even that of some modern civilizations.
Unlike other underwater ruins, which are incomplete or difficult to verify as actual man-made structures, Pavlopetri has a complete town plan, including streets, architecture and tombs.
The site has been routinely explored by the University of Cambridge and the University of Nottingham, the latter of which has an ongoing excavation project to find and date artifacts found on the ocean floor.