Greek Debt: Another BRICS in the Wall 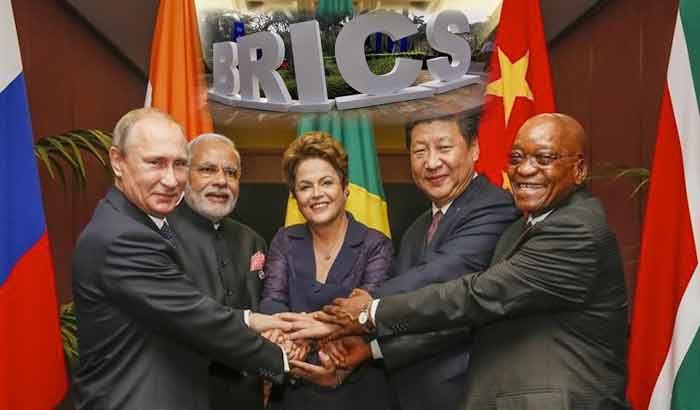 BRICS is the new catchword that plays in the lips of SYRIZA leftist hardliners. All of a sudden, a new international development bank will give Greece loans without any obligations.
At least that’s what Alternate Minister for Social Security Dimitris Stratoulis believes. Speaking on Greek radio yesterday, he said that Athens has several alternatives if the European Union and the International Monetary Fund do not give further financial aid. When asked what the alternatives are, he mentioned BRICS, the new international bank formed by Brazil, Russia, India, China and South Africa. BRICS is created to rival the U.S. based International Monetary Fund.
When asked what if BRICS lend Greece and ask for a Memorandum, the Greek Minister replied that there won’t be any Memoranda. He is certain that the new bank will lend money to Greece unconditionally. Loan conditions are an insignificant detail for Stratoulis, who, incidentally, refuses to see that state coffers are empty.
There is an irony here. Panagiotis Roumeliotis, Greece’s former representative to the IMF, has been appointed to explore the possibility of Greece joining the BRICS bank. Roumeliotis said on Greek television that BRICS helps countries in the funding of development works.
However, Greece’s possible entry into the BRICS bank won’t be discussed before a summit of the five member-countries in July, RIA Novosti news agancy reported on Thursday, citing Russian Deputy Finance Minister Sergei Storchak. The bank is open to any sovereign member of the United Nations, he said, according to a Bloomberg report.
Again, the Greek government refuses to see a detail that costs around 10 billion dollars. BRICS has an initial capital of 100 billion dollars and another 100 billion in reserves. In order to join the bank, Greece must contribute to that amount. Furthermore, the Greek economy has shrunk 25% in the past five years.
Stratoulis’ belief that there’s free money going around for Greece matches the belief of Productive Reconstruction Minister Panagiotis Lafazanis, chief of SYRIZA’s so-called Left Platform, who claims that Russia will give Greece money now for a gas pipeline that will be completed in 2019. The fact that Russia’s Gazprom has already refused any discounts in the current deal Greece has with the Russian gas supplier was never mentioned by Lafazanis. Why let harsh capitalist reality blow the Minister’s communist bubble?
Lafazanis and Stratoulis have repeatedly but indirectly expressed that are against an agreement with the country’s creditors. They are in favor of a rift with Europe. They want Greece to be an independent country with alliances outside the European Union and NATO. They belong to a group of SYRIZA hardliners who refuse to see the reality that even their salaries are in peril unless there is a cash inflow soon.