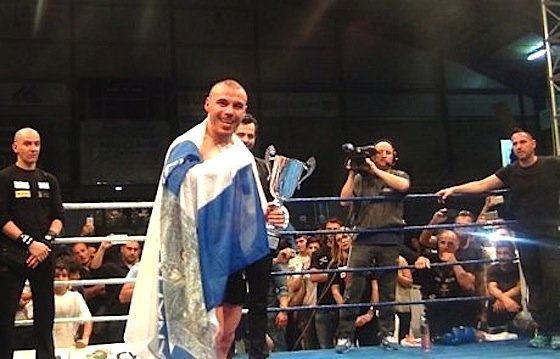 Greek professional kick-boxer Mike Zambidis continued his winning streak by defeating Turkish Erkan Varol in Limassol, Cyprus on Saturday night, May 9.
The Iron Challenge Cyprus event took place at the Apollon Indoor Arena and the 34-year-old kickboxer did not disappoint his fans, securing his victory even after sustaining a deep cut to his forehead. Zambidis is a 15-time world champion and a current SUPERKOMBAT Middleweight Champion. His current kickboxing record stands at 155 wins and only 22 losses.
Furthermore, the Iron Challenge Cyprus even also included other kick-boxing, boxing and Muay Thai fights among 28 major Cypriot and Greek athletes.
“I would like to thank the fans from the bottom of my heart for their support and the extra motivation they gave me by filling up this arena. I am very proud to set an 11-0 record for Greece. I now look forward,” he said.
Zambidis will now be preparing for the last fight of his career which is set to take place in Athens this coming June.
(source: cyprusscore)