Tsipras: Agreement Only According to Greek People's Mandate 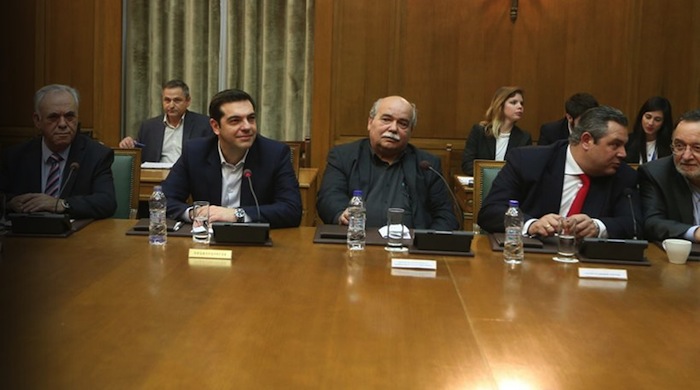 After an eight-hour cabinet meeting led by Prime Minister Alexis Tsipras regarding Monday’s crucial Eurogroup, there was no official statement other that the reiteration that the Greek government will not sign an agreement with creditors unless it is within the framework of the people’s mandate.
Coming out of the meeting, Defense Minister Panos Kammenos appeared optimistic, saying that the government continues its work united and determined.
When asked about the possibility of national elections, Kammenos said that, “The government has a fresh people’s mandate and it will follow along these lines.”
The prime minister described to participating ministers the expectations regarding the ongoing negotiations.
“At Monday’s Eurogroup we want t have a clear statement of the progress made in the last period of negotiations,” Tsipras said according to Maximos Mansion sources. However, in any case, any agreement reached must be within the framework of the people’s mandate, he clarified.
The same sources noted that the prime minister and cabinet believe that Greece has made recorded efforts and is totally consistent on the fulfillment of its obligations, proving its willingness to come to an agreement — a mutually beneficial agreement — and both sides should work along this goal.
A positive message from the Eurogroup session will send a message to the European Central Bank to relax its liquidity restrictions on Greece, the government sources estimate.
After Tsipras’ opening speech, the government council was briefed by Government Vice President Yiannis Dragasakis, Finance Minister Yanis Varoufakis and Alternate Foreign Minister for Economic International Relations Euclid Tsakalotos.
On Monday’s meeting of euro zone finance ministers, Greece will be represented by Varoufakis and head of Economic Advisors Council  Giorgos Chouliarakis.