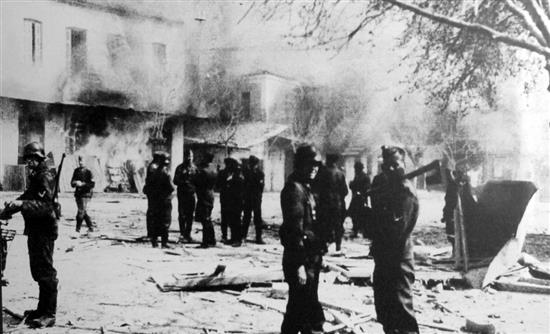 Screens across Athens subway stations are showing a government-backed film in which Greece is demanding World War II reparations from Germany.
The 50-second video clip shows footage from the Nazi occupation (1941-1944) that has cost Greece hundreds of thousands deaths and hundreds of billion in damages and looting. The short film is shown in 35 metro stations of the capital.
So far Berlin has acknowledged the moral obligation to compensate the families of the victims but says that the reparations issue has been settled in 1990, when the country was re-unified and a treaty was signed between Germany and the Allies — including Greece — in which they renounced all claims as the victors.
“The Ministry of Defense in March met organizations working on the issue of World War II remembrance and German reparations to encourage initiatives to promote the subject, and the idea for this short was born,” Markos Charitos, who sits on the newly formed parliamentary committee that pursues war reparations, told AFP.
The film shows images of German planes flying over the Parthenon and the words “World War II, resistance, we do not forget.” A series of black and white photographs shows the cost in human lives.
Russia to help Greece in its pursuit of World War II reparations
Moscow is to help Athens in the investigation for World War II reparations from Germany by providing access to Russian archives from the period.
Following a request by Alternate Defense Minister Costas Isichos, the Russian Embassy in Athens has provided Greek authorities with a list of archives, including documents, photographs and footage.