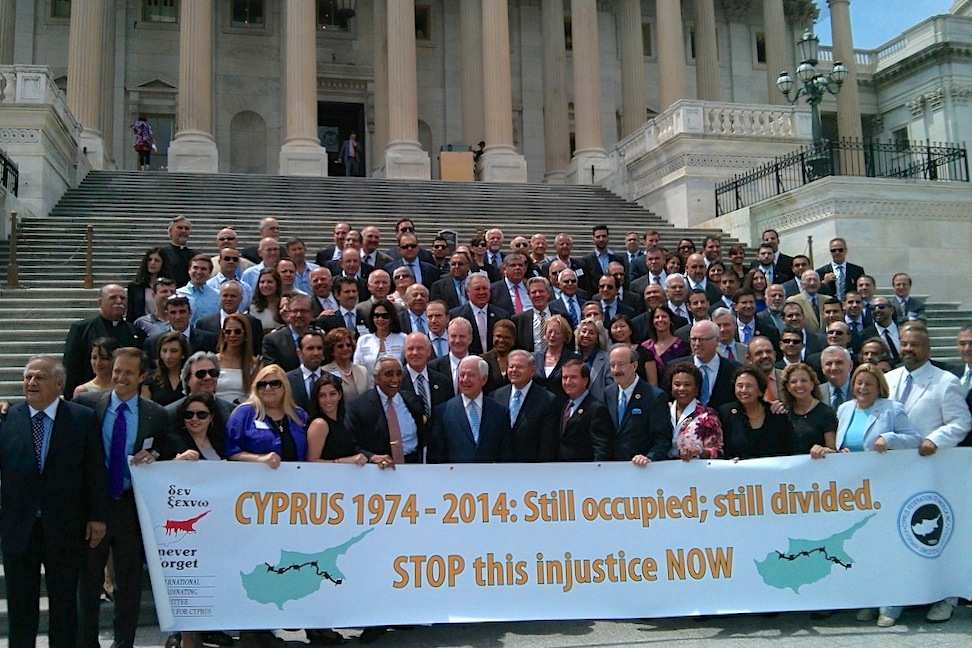 American Hellenic Institute (AHI) President Nick Larigakis responds to a guest commentary authored by Mr. Mehmet Mustafaoglu that was published May 1, 2015 in the online version of The Hill, a newspaper with a focus on the U.S. Congress. Mr. Mustafaoglu’s commentary, “Cyprus: The volatile and oddly forgotten frozen conflict” appeared in the The Hill’s Congress Blog, a forum for lawmakers and policy professionals.

Mr. Mustafaoglu’s blog piece “Cyprus: The volatile and oddly forgotten frozen conflict” is littered with inaccuracies, falsehoods, and propaganda; which is unfortunate for a blog section intended to be a forum for lawmakers and policymakers. The blog post is a disservice to The Hill’s audience.

To set the record straight, on July 20, 1974, Turkey invaded the Republic of Cyprus with the illegal use of U.S.-supplied arms and equipment in violation of the U.S. Foreign Assistance Act of 1961, as amended, the UN Charter article 2 (4), the preamble and article 1 of the NATO Treaty, and customary international law. Turkey occupied about 4 percent of Cyprus during the initial phase of its invasion.

On August 14, 1974, three weeks after the legitimate government of Cyprus was restored, Turkey launched the second phase of its invasion of Cyprus. In the second phase, Turkey grabbed another 33 percent of the island, expanding its land grab to nearly 40 percent of Cyprus’s sovereign territory; killed innocent civilians, raped women from the ages of 12-71, forced 170,000 Greek Cypriots from their homes and property, and committed mass destruction of property including churches. The Turkish army continues to occupy this territory to this very day. Furthermore, to secure its land grab of Cypriot territory, Turkey has illegally settled northern, occupied Cyprus with more than 180,000 Turks from Anatolia in violation of the Geneva Convention of 1949, Section III, Article 4, which prohibits colonization by an occupying power.

Since 2003, there have been upwards of approximately 18 million incident-free crossings between Greek Cypriots and Turkish Cypriots of the so-called “Green Line” that divides Cyprus. This demonstrates that the assertion for the need of 40,000 illegally-staged Turkish troops on the island by Turkey is ridiculous. As a result, we’ve seen calls for the withdrawal of Turkish troops from Cyprus. On March 12, 2014, the European Parliament’s Report on Turkey called on Turkey “to begin withdrawing its forces from Cyprus and to transfer the sealed-off area of Famagusta to the UN in accordance with UNSC Resolution 550 (1984.)” In addition, then-House Foreign Affairs Chairman Ileana Ros-Lehtinen described the “overwhelming military force” used by Turkey in the invasion of Cyprus and emphasized her repeated efforts to press for the withdrawal of Turkish forces from Cyprus in communications with the Obama administration and meetings with Turkish officials, including then-Turkish Foreign Minister Ahmet Davutoğlu in 2012. More recently, Chairman Ed Royce echoed his predecessor stating at an AHI event on Capitol Hill last month, “ISIS is getting through a forced border through Turkey. What we need now is for the 45,000 Turkish troops garrisoned in Cyprus to do the right thing…the government of Turkey [to do the right thing] and to put those troops on the border of Turkey so they can prevent ISIS from coming into [and out of] Iraq and Syria.” Clearly, the removal of Turkish forces from Cyprus would be a welcomed confidence-building measure for peace.

With regard to the recent suspension of settlement talks due to Turkey’s incursion of Cyprus’s sovereign waters and Exclusive Economic Zone (EEZ), Turkey, which is 40 miles from the northern coast of Cyprus (the only fact Mr. Mustafaoglu has correct), has no rights in the continental shelf of Cyprus or in the area because it has not ratified any of the three treaties on the Law of the Sea. The European Parliament’s Progress Report on Turkey (March 12, 2014) called on the Turkish Government to sign and ratify the United Nations Convention on the Law of the Sea (UNCLOS), which is part of the acquis communautaire, without further delay, and recalled the full legitimacy of the Republic of Cyprus’ exclusive economic zone; and called on Turkey to respect the sovereign rights of all Member States, including those relating to the exploration and exploitation of natural resources in territories or waters under their sovereignty. Unfortunately, Turkey made good on raising tensions in the eastern Mediterranean with its provocative act to issue a NAVTEX, sending a survey vessel, Barbaros, accompanied by a warship and two support vessels, into Block 3 of Cyprus’ EEZ, in October 2014. Furthermore, it is the position of the U.S. government “to support Cyprus’s right to explore for energy in its offshore areas” as stated by U.S. Department of State Spokesperson Jen Psaki, February 5, 2014 [1]

Finally, I conclude by adding that Vice President Joe Biden stated on his historic visit to Cyprus, May 21-22, 2014, “The United States — I want to be clear about this — recognizes only one legitimate government of the Republic of Cyprus, and my visit and meetings throughout the island will not change that. It is my personal position. It’s the position of the United States of America, and it’s the position of the entire world — save one country.”

*Nick Larigakis is the president of the American Hellenic Institute, a non-profit Greek American public policy center and think tank that works to strengthen relations between the United States, Greece, Cyprus, and within the Greek American community.