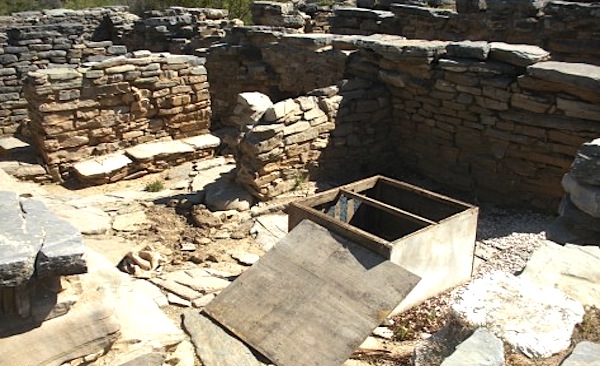 Greece’s culture ministry has announced that work will begin on Monday to restore damage caused by illegal digging carried out by looters at the Zominthos archaeological site, on Mount Psiloritis on Crete. According to experts, there are signs that the site was vandalized and disturbed.
In an announcement issued on Sunday, the ministry reported damage in three of the 42 rooms uncovered by the official archaeological excavation. It said the illegal diggers had gone through the floor and destroyed a section of the southern wall of one room, that the base of a pillar found on the site had been moved and broken, while in rooms 35 and 26 there were signs of disturbance and illegal digging.
The ministry’s deputy general secretary Maria Andreadaki-Vlazaki paid a visit to the site on Saturday and a decision was made with the head of the antiquities ephorate and the head of the dig to begin work to restore the damage immediately.
(source: ana-mpa)