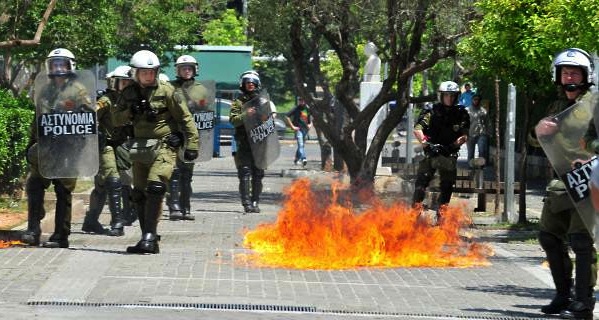 Minor rioting incidents involving Molotov cocktails occurred in central Athens, Greece, after the Labor Day rally ended.
Anti-authoritarians threw Molotov cocktails in Propylaea and police responded by throwing stun grenades. Then, the group moved to Exarchia, where they turned over garbage bins and set them on fire in an attempt to set up makeshift barricades on Stournari street. Greek police made two arrests in the area and the intensity eased a little after 4pm.
Meanwhile, there was no tension during the standard Labor Day rally, despite the fact that a small anti-authoritarian group decided to throw Molotov cocktails to the riot police officers.
A small incident also occurred outside the hotel Grand Bretagne in Syntagma Square, where once again anti-authoritarians threw Molotov cocktails, however, the riot police did not respond.