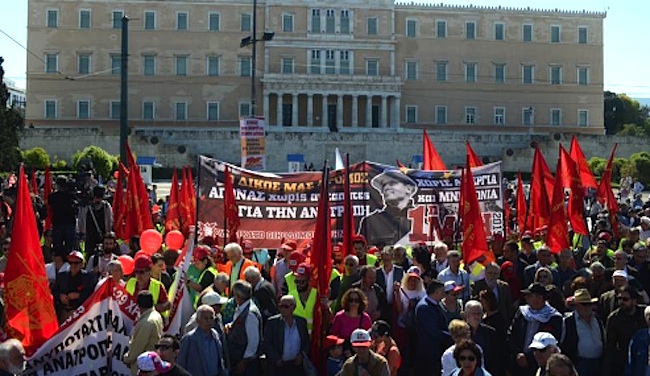 Downtown Athens is closed as of this morning, Friday, for strike rallies to commemorate Labour Day (May 1).
Participants of a rally by the umbrella labor unions of Greece, GSEE of the private sector and ADEDY of the public sector, who had gathered at Klafthmonos Square on Stadiou, are marching to Syntagma Square, as part of a strike action commemorating the day.
An earlier rally by PAME, the Communist Party-affiliated labor union, at Syntagma has concluded.
The second rally is being attended by Interior and Administration Reconstrunction Minister Nikos Voutsis, Productive Reconstruction, Environment and Energy Minister Panagiotis Lafazanis, Finance Minister Yanis Varoufakis, Social Insurance Altenate Minister Dimitris Stratoulis and Attica Region Governor Rena Dourou among other officials.
In a message as he arrived at the PAME rally, Communist Party of Greece General Secretary Dimitris Koutsoumbas said on Friday that Labor Day’s message consists of leaving the memorandum policies and breaking with the European Union.
The Day points us to the road away from the memorandum and its application laws, Koutsoumbas underlined as he arrived at the rally organized by the KKE-affiliated PAME labor union. 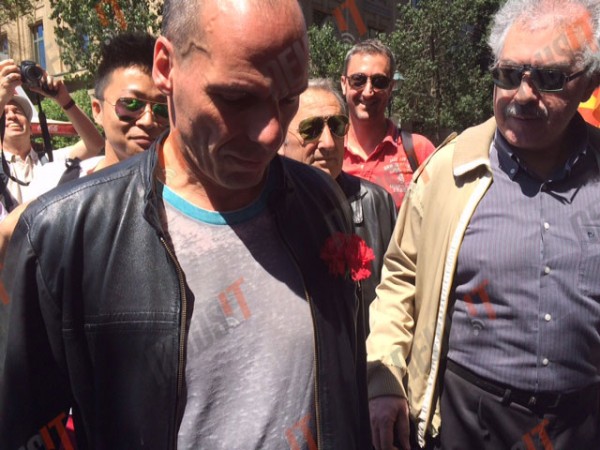 It also points us towards the direction of expanding the labor movement to demand better wages for workers and collective work agreements, as well as towards breaking with the EU and the capital and its rule.
In statements at Klafthmonos Square earlier, Lafazanis said that this year’s message on Labor Day was for struggle and resistance, and noted that Greece is negotiating toughly, the government will keep its commitments and the negotiations will have a positive outcome.
Yanis Varoufakis became one with the crowd. He wore a simple T-shirt, a leather jacket and a carnation in his front pocket in order to participate in the rally that took place in central Athens. Varoufakis was cheerful as he spoke with the citizens who were commemorating Labor Day. Meanwhile, several reporters approached him in an attempt to get a statement.
(source: ANA-MPA)