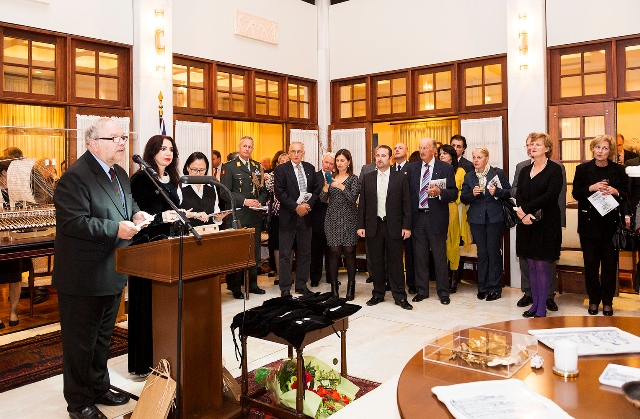 On April 29, 2015 the opening of the art exhibition “Lemnos – the Greek dimension in the ANZAC Centenary” took place in Canberra, as part of the events for the Centenary of the Australian and New Zealand Expeditionary Corps, in the presence of diplomatic corps representatives, local media, Australian Foreign Ministry officials and Greek Diaspora members.

The exhibition was inaugurated by RSL National Trustees Brigadier President John Sheldrick OAM (Ret’d), who gave a short speech praising the humanitarian work that was accomplished on the island and the fact that in both world wars Greece was connected with ANZAC.

Meanwhile, famous historian Dr. Maria Hill made historical reference to Lemnos and its contribution during World War I.

The exhibition, curated by Eva Dafaranos, included the works of 14 artists from various Australian states, such as New South Wales, Victoria, Perth and the Australian Capital Territory. “The ANZAC Centenary is a historic milestone for two countries that I hold dear, Australia and New Zealand, so there is no doubt that I felt the need to commemorate in an artistic way the Greek connection to this landmark anniversary,” said the curator.

The exhibition was presented at the Greek Embassy in Canberra (115 Empire Circuit, Yarralumla) and it will remain open to the public on Saturday and Sunday, May 2 and 3 from 11 am to 4 pm. Admission is free.