Tsipras: Greece, Cyprus, Egypt Are Pillars of Security in a Wider Destabilized Region 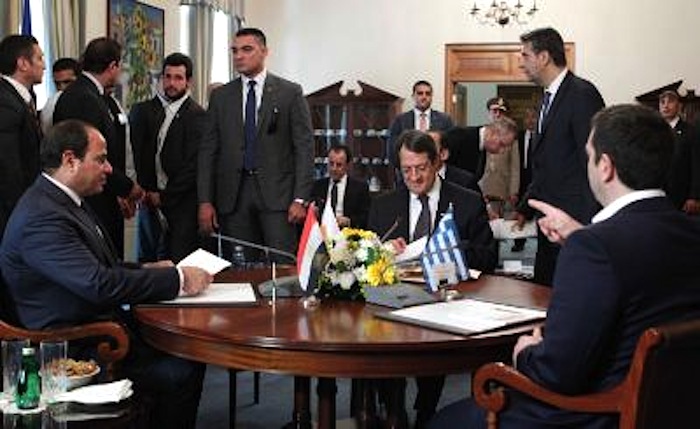 Greece, Cyprus and Egypt are pillars of security in a wider destabilized region, Prime Minister Alexis Tsipras said in statements following the conclusion of the trilateral Greece-Cyprus-Egypt summit in Nicosia on Wednesday.
The Greek Prime Minister said that they agreed to proceed with the delimitation of maritime zones, in cases that the consultation and cooperation with third countries is not required, with respect for international law and the law of the sea.
He noted, however, that this process will not only be in the interest of the three countries but it will also be a challenge for other countries in the region to cooperate and delimitate their maritime zones on the basis of all principles of international law. He made special reference to the need to strengthen cooperation on the matter of regional security in order to address radical Islamism, a threat to our civilization, as he said.
Tsipras spoke of further deepening cooperation between Greece and Egypt, stressing that “economic, commercial and energy cooperation contribute effectively and are prerequisites for the consolidation of prosperity but also peace and stability in the region.”
The Greek Prime Minister spoke in favor of the resumption of bicommunal talks in Cyprus and said the election of Mustafa Akinci as the new Turkish-Cypriot leader was “interesting.” On his part, Cypriot President Nicos Anastasiades said that the alarming developments in other countries of the region, such as Syria, Iraq, Yemen, intensify the need for joint action by the international community in addressing the challenges that transcend national borders.
Regarding the peace process in the Middle East, “we reiterated the principle position to achieve a just and lasting peace through the creation of a viable and sovereign state in Palestine under the UN resolutions,” said Anastasiades and added that “we discussed the increasing migratory flows that are a threat not just to countries in the region but to all European countries. With the intensification of our efforts, the objectives we have set will be successful and will become a model for cooperation for the other countries in the region as well.”
Egyptian President Abdel Fattah el-Sisi said that “the second summit between the three countries in just six months reflects the willingness to deepen our cooperation. We seek cooperation in shaping a bright future for our people based on tolerance, peace, stability, social justice.”
He referred to the Cyprus problem, saying that “our position is firm, based on the unity of the people of Cyprus, with all its communities enjoying sovereignty and independence.”
The Egyptian President also spoke about his meeting with the Greek Prime Minister saying: “Today we agreed to open new horizons for cooperation between our countries in the economic, energy, tourism and shipping sectors.” He also said that they agreed on measures to combat terrorism and referred to the need to resolve the Middle East issue with the creation of a Palestinian State on the basis of UN resolutions.
(source: ana-mpa)